A MAJOR REDESIGN SPARKS A
NEW KIND OF ENERGY

The renowned utility company had worked out of their existing office since the 1970’s with 550 employees
scattered across five floors over approximately 200,000 square feet of office space. But such a major change
meant shining a light not just on the company’s hierarchic office system and dated furnishings, but their bright
vision of the future.

Much as OPG is transforming its business, they wanted to reduce their own real estate footprint down to 2.5
floors, and one of the major changes was to eliminate their 246 private offices.

Principal at Figure3, Suzanne Wilkinson observes: “Reinvigorating the excitement and passion for what
OPG does is truly important here. With its sights set on being a catalyst for economy-wide decarbonization
and a climate change leader, OPG knew they needed to attract the talent to deliver their business goals.”

“OPG was going through culture shifts affecting every part of their business while also pursuing the
development of new clean energy technologies, new entrepreneurial business lines, and a stronger focus
on equity, diversity and inclusion,” notes Michelle Berry, VP, Workplace at Figure3. As a government agency,
every penny OPG spends is scrutinized so there virtually hadn’t been any changes to their office for close
to 25 years. “It was like being in a time warp, the executives were in over-sized private offices covering
all perimeter windows and the interior spaces were compressed with little to no space allocated for
collaboration or gathering spaces. The disparity was too great between what leadership had versus what
the employees had.”

“OPG was going through culture shifts affecting
every part of their business from the way their
plants were processing and generating power,
to a huge change around leadership.”
/ Michelle Berry

Figure3 walked OPG through their proprietary research approach and visioning exercises with employees
from across the spectrum to produce an extensive Strategy Report. “We uncovered the many nuances that
made the groups unique but also discovered the common threads that bind the organization,” Berry notes.

The building has a unique, curved profile overlooking Queen’s Park that Figure3 capitalized on. To promote
movement and connection among staff, Figure3 created ‘The Boardwalk’, an energetic open environment
along the window offering a choice of stimulating work settings with access to natural light. “The natural
light radiating from the curve of the building wasn’t reaching the inner work spaces which drove us to
prioritize the location of the common and shared spaces,” says Wilkinson.

To further emphasize OPG’s unique culture, a feature wall of hardhats displays the logos of construction
group partnerships and the reception desk is made of steel tubes to mimic the nuclear calandria cooling
tube. “We basically wouldn’t have anything if we didn’t have energy, so OPG wanted to pay attention to
the purpose of the organization with a direct connection to the power plants across Ontario. We wanted to
make sure we put their purpose, people, and the array of energy on display,” says Berry. 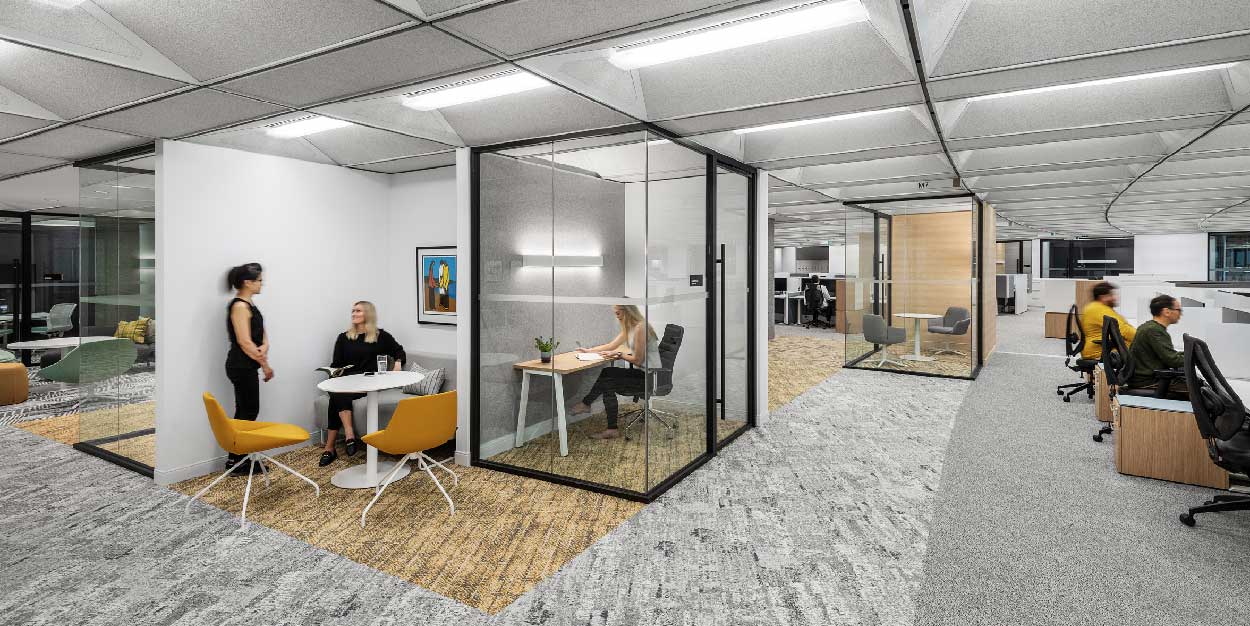 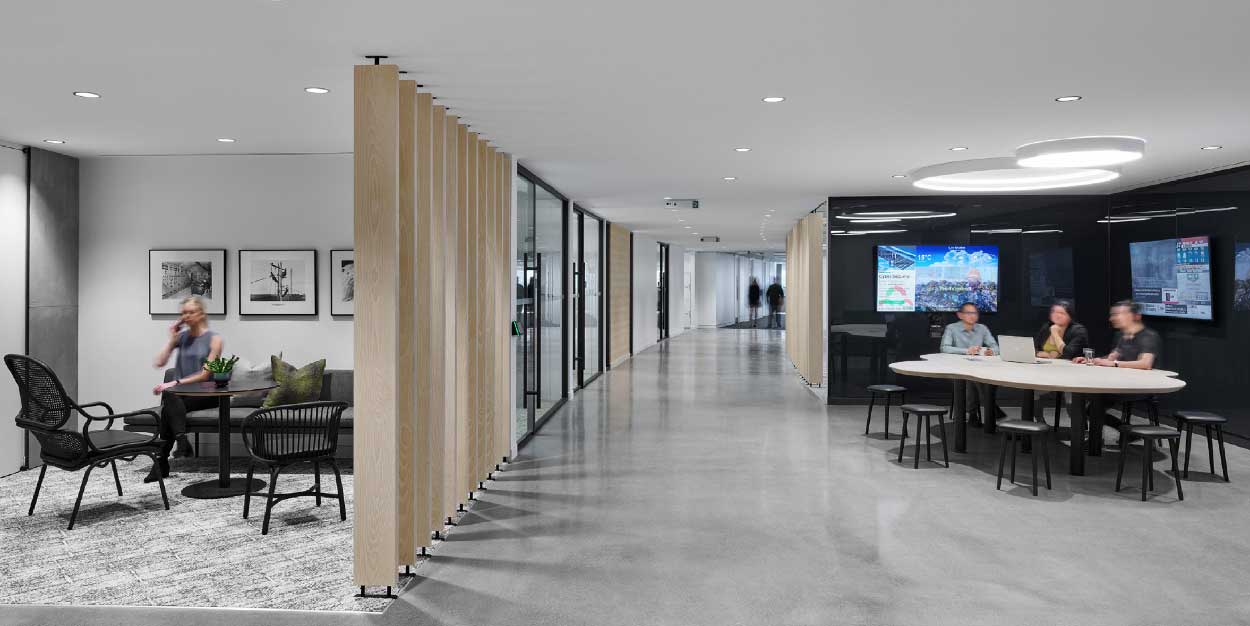 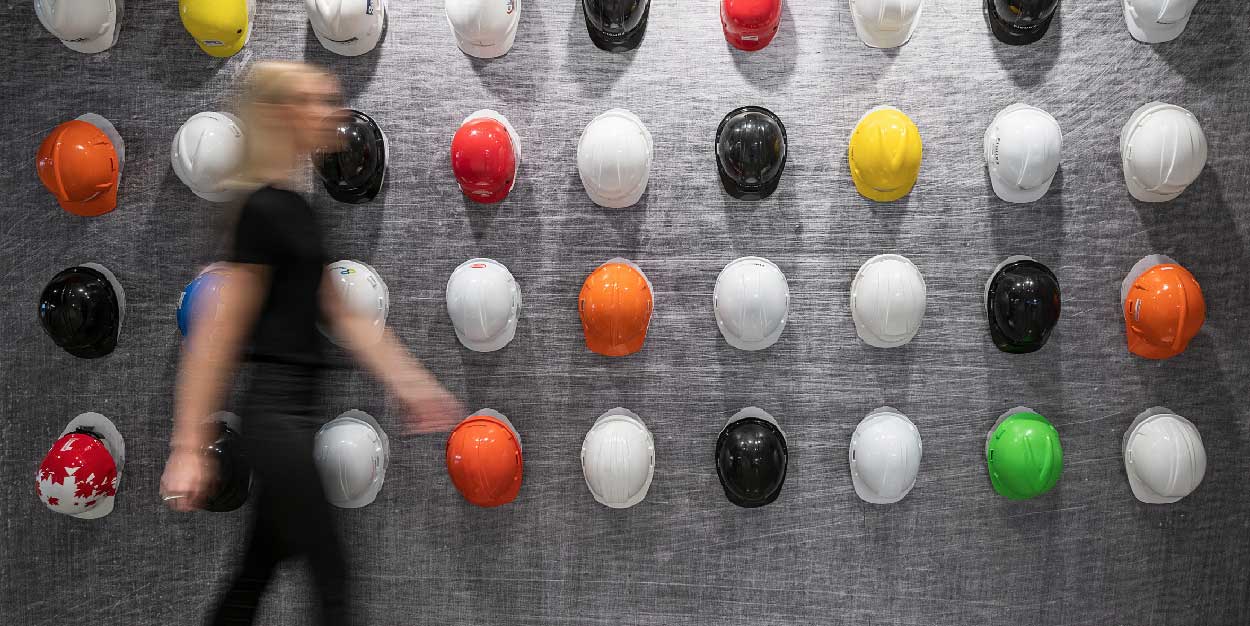 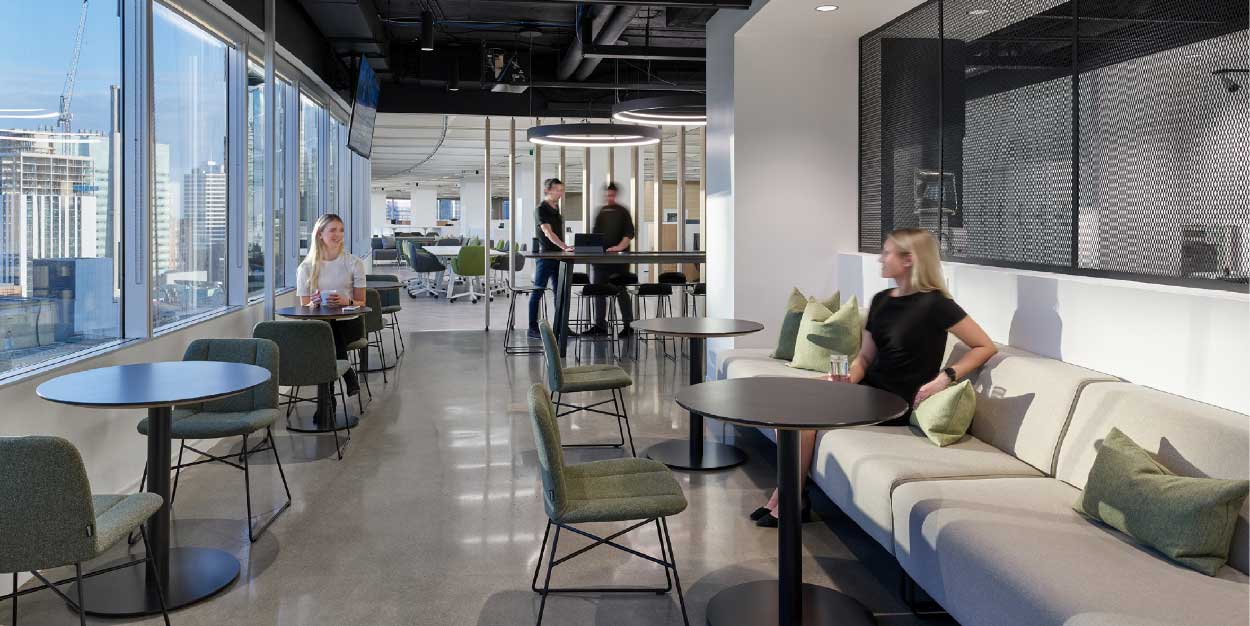 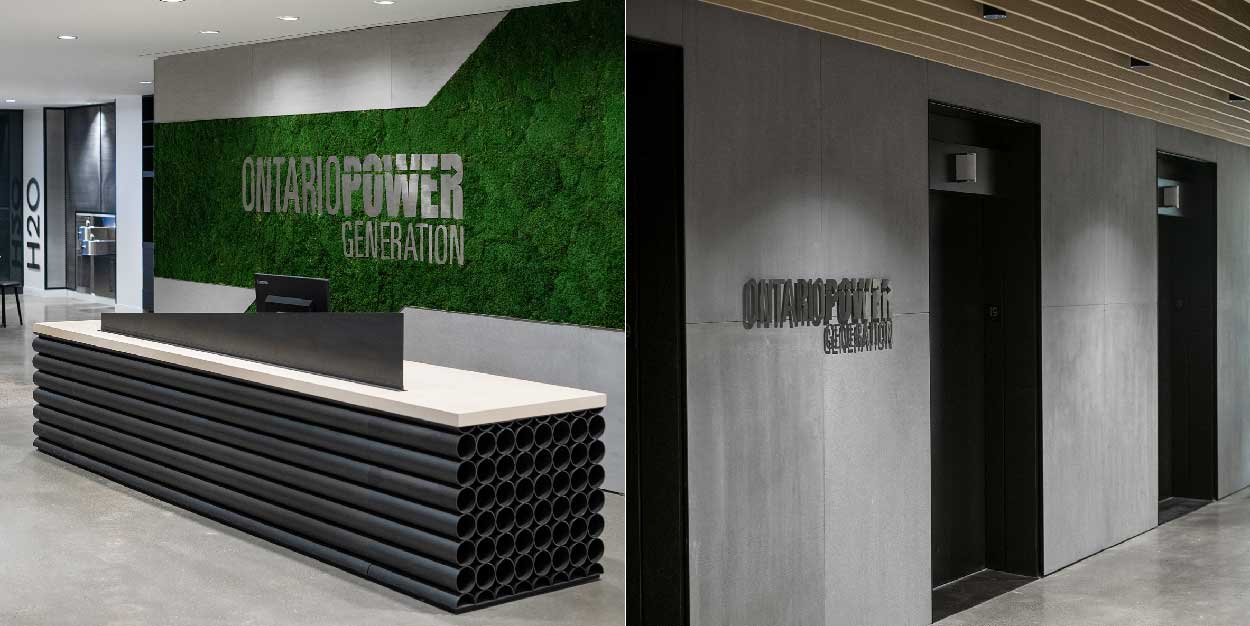 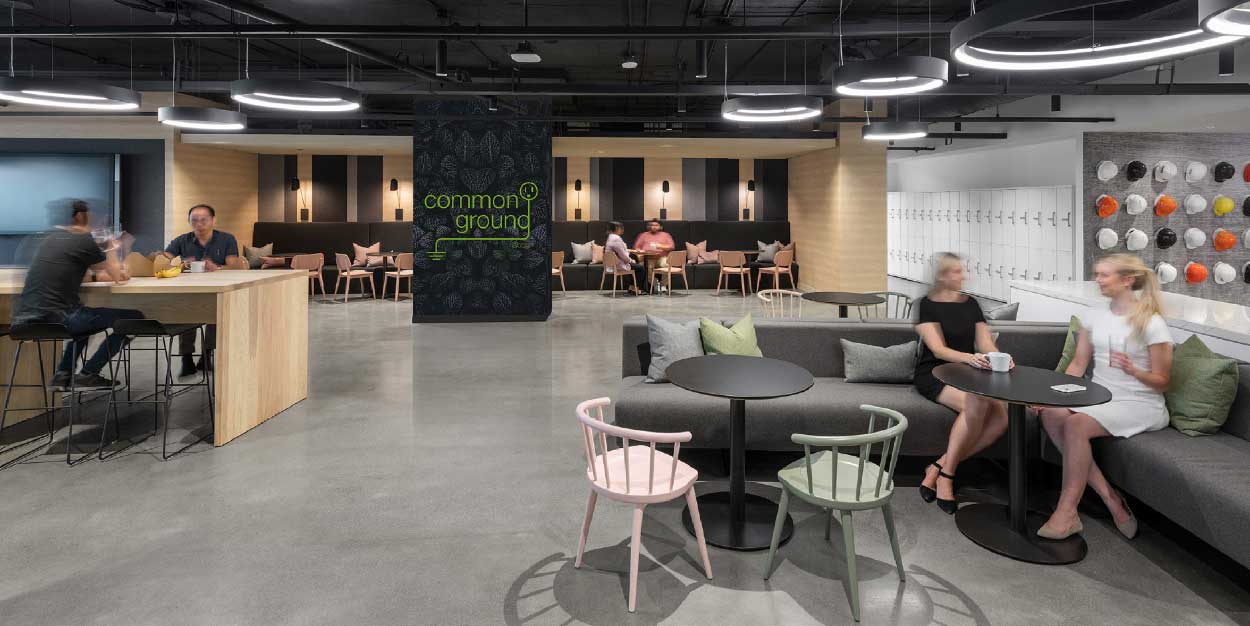 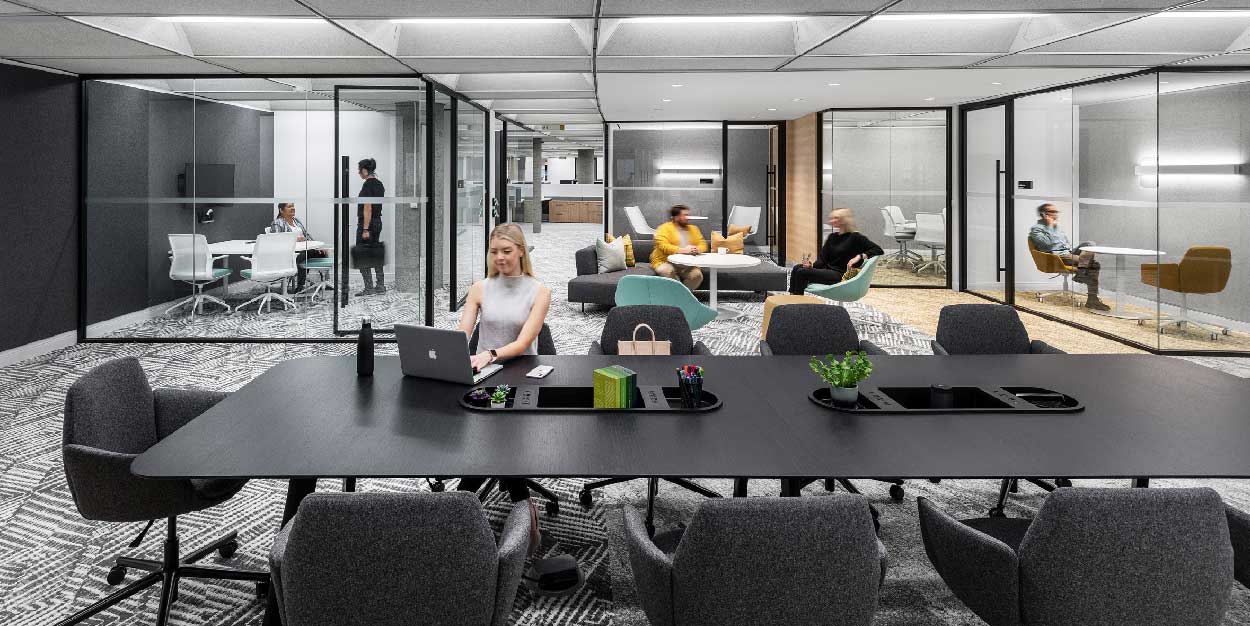 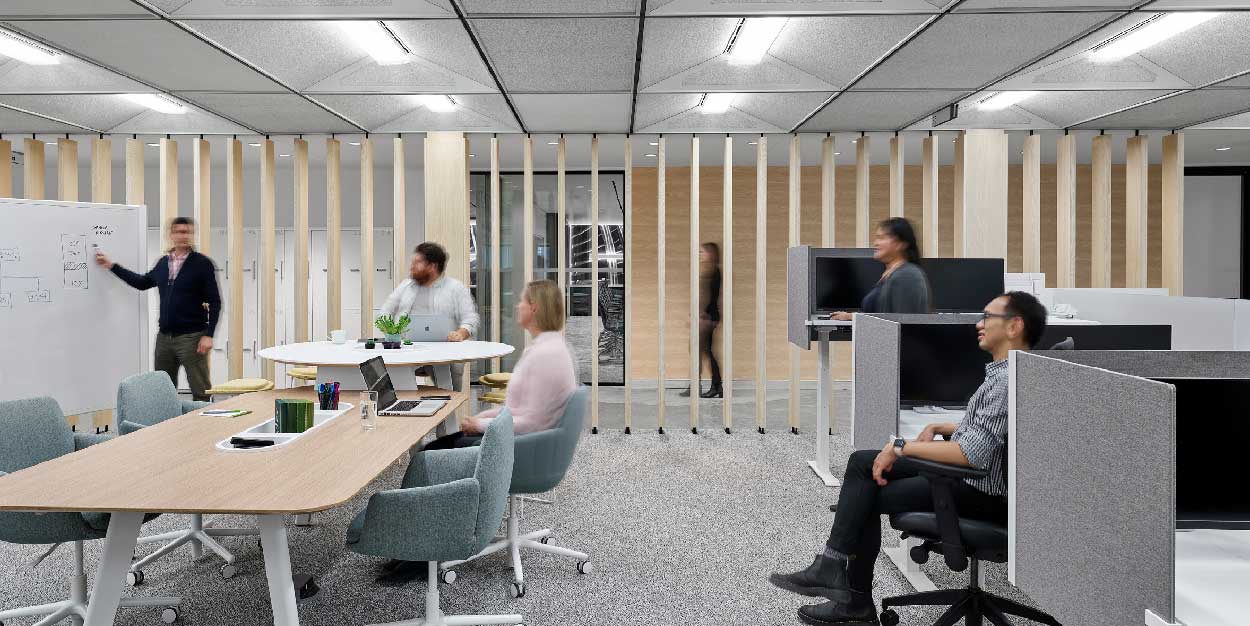 “Previously OPG had less than 10 meeting rooms so people became very territorial,” says Berry. “We
removed the private offices but gave them a huge complement of meeting rooms, both open and
closed, with more choice and variation.” The organization didn’t want staff to park themselves in the same
spot every day, instead circulating employees to different “neighbourhoods” that include grouped key
meeting spaces, support spaces and primary workspaces to spark interaction and collaboration. In this
planning model, the head of nuclear energy might bump into someone in solar development for a burst of
spontaneous collaboration.

Connie Hergert, VP Corporate Real Estate at OPG explains the CEO was committed to eliminating private
offices, but many executives felt they had worked hard to get to a level where they could secure their own
office, making it difficult to give that up. “The majority who have made the transition are huge proponents of
this model,” says Hergert. “The executives now realize they didn’t actually spend a lot of time in their offices.
The new variety of huddle rooms provide a quiet, private space but there are more conversations happening
now being more accessible.”

That’s also led to higher trust levels as employees have greater access to their managers and colleagues.
Many problems and challenges are addressed by a quick huddle or hallway chat rather than scheduling
a formal meeting. “We’ve also reduced our costs by more than half and eliminated the churn caused by
traditional office moves,” notes Hergert.

One of the inspirations for the design was Moriyama House in Tokyo, the brainchild of Ryue Nishizawa,
where each room is a building in itself and the spaces between the buildings are equally vital. Wilkinson
explains Figure3 applied the principles to the OPG floorplan, where neighbourhood meeting spaces
without walls are often adjacent to closed meeting rooms. “It allows people to have choice and variety where
they position themselves and utilize all the circulation space in the functional areas. The boardwalk houses
a variety of interactive spaces with moveable furniture all along the perimeter.” Figure3 worked to ensure
the communal lunch room had access to natural light, and introduced biophilic elements throughout, plus
wellness rooms and quiet zones for heads-down focus.

“Our employees love our new space and say they feel more connected to the company and each other,”
enthuses Hergert. “They tell us it makes them feel like we are a “modern company” now: our branding,
values and purpose are reflected in the space.”

“One of my favourite comments from a long-standing employee was that she made a new work friend in
the first week in our new space. Both of them had worked at OPG for over 30 years, but they had never met
because they were stuck in their cubicles. That’s how much the workplace has brought people together,”
says Hergert.