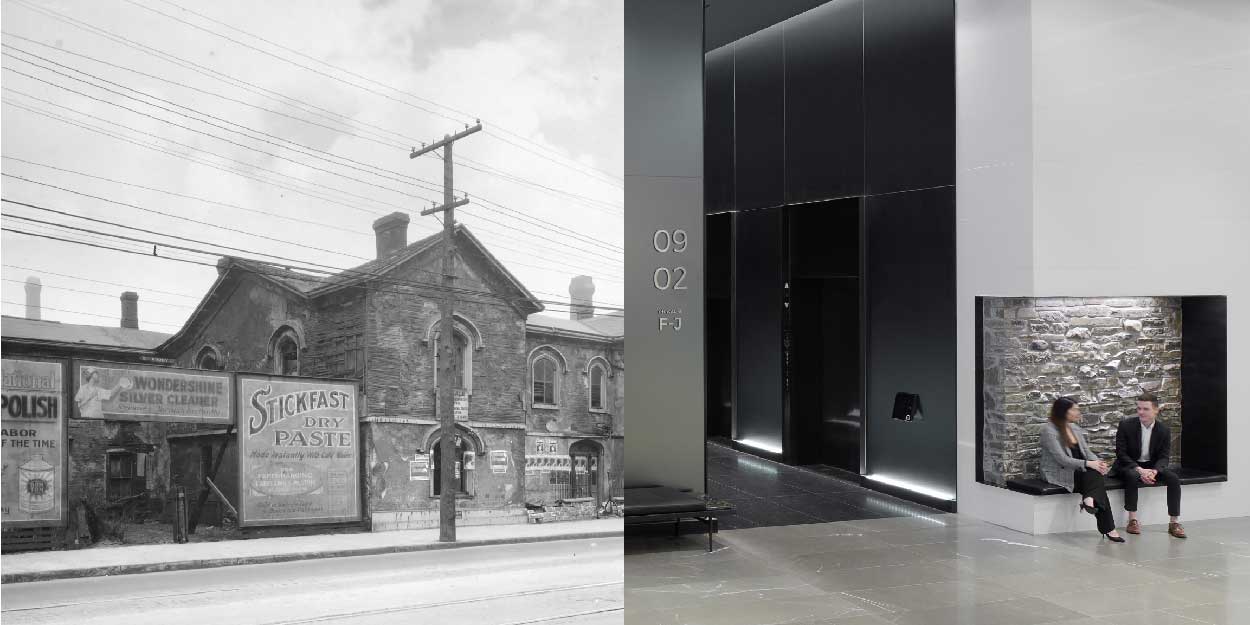 There’s a lot to read between the lines at 351 King St E. A graphic black and white 17-storey tower,
The Globe & Mail Centre could be pulled from the front page of the venerable national broadsheet. But
like the best newspaper reportage, there is truth to be uncovered, stories to be told, and history made to
feel relevant and alive.

Built by First Gulf within the 10 city blocks of what was originally called the Town of York, the Globe
and Mail Centre (which snagged a NAIOP Real Estate Excellence (REX) award for Office Development of the
Year in 2018) sits within the bustling St. Lawrence neighbourhood. This building occupies a storied site,
the former ‘Berkeley House’ was a significant early residence in the Town. Built in 1795 and made from bricks
and covered by stucco, the house was considered “large and rambling, with a somewhat quaint but
stately appearance.”

The Small family, who lived at Berkeley House from 1795 to 1814, were important members of the Family
Compact and the social and political milieu of Toronto. The house was the setting for meetings of the
Executive Council of Upper Canada and in 1813, American troops looted and sacked it during their
occupation following the Battle of York. 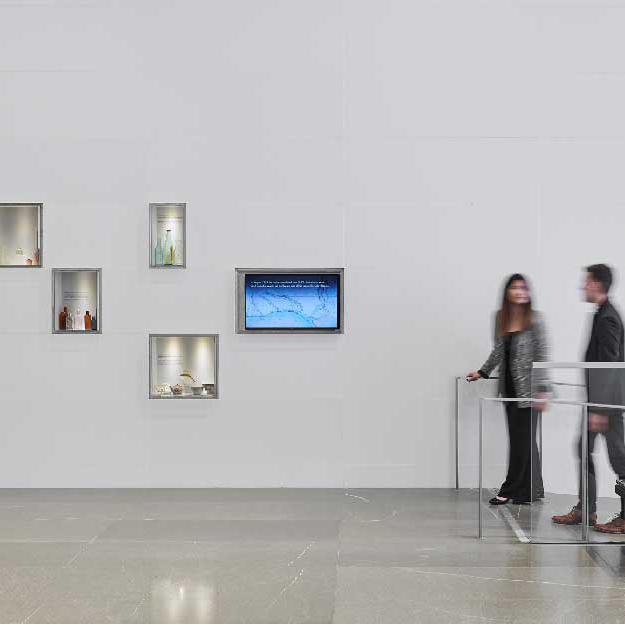 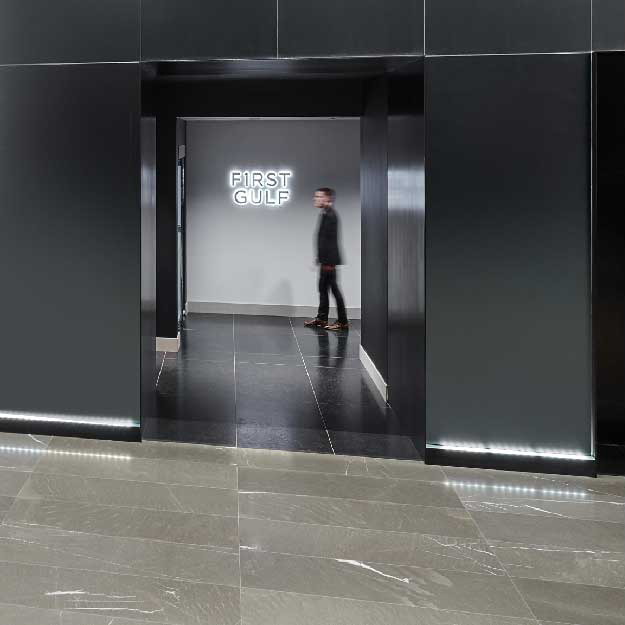 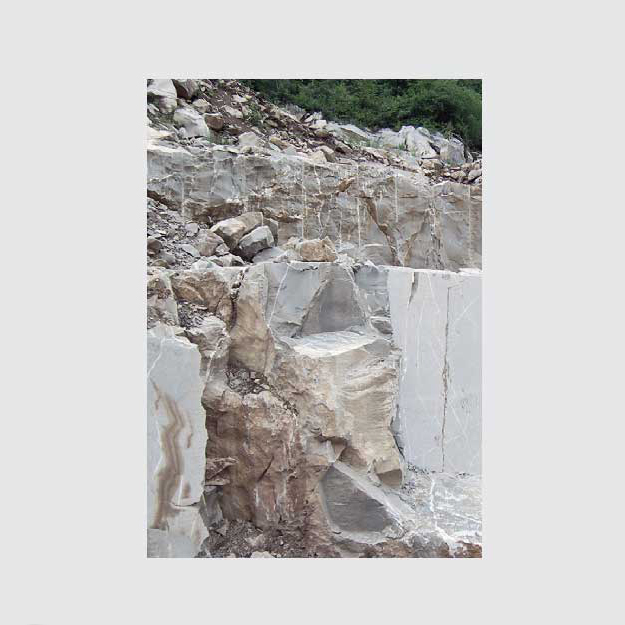 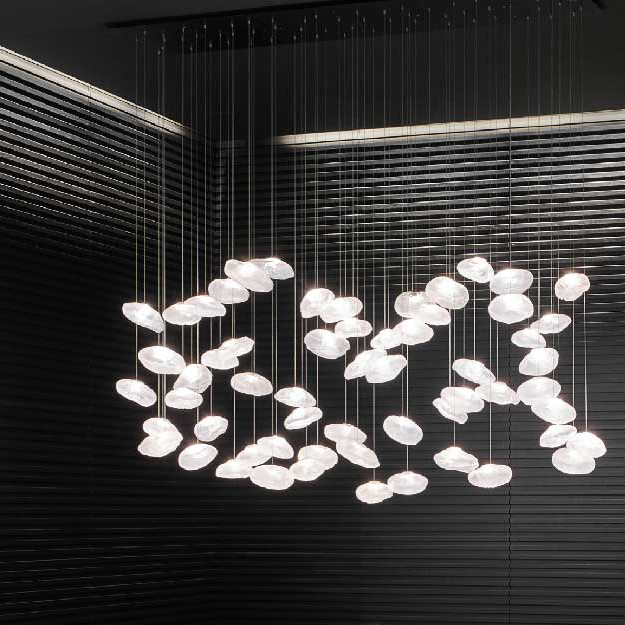 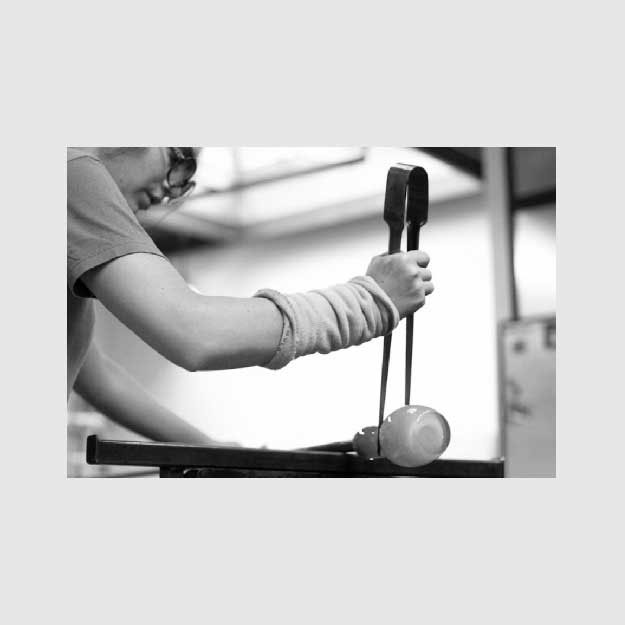 “It’s subtle but we’re peeling back something
modern and integrating the history within and
displaying the old within the space.”
/ Suzanne Wilkinson

During excavation, bits of the house revealed itself, including a bottle of Heinz’s intriguingly named ‘Woozy
Sauce,’ as well as bits of porcelain, remnants of the grand sets of dishes that graced many important dinners.
“A lot of Toronto history has been demolished and lost,” acknowledges Suzanne Wilkinson, Principal at
Figure3, which designed the lobby space in collaboration with Diamond Schmitt Architects. “We wanted
to establish a museum-like environment in the lobby to honour that heritage.”

The Globe and Mail Centre is surrounded by pillars of design, Canadian retailers Nienkamper and plan b, as
well as Italinteriors and Kiosk, purveyors of cutting edge contemporary furnishings. “Initially we conceived of
the lobby as a European piazza, with an illuminated ceiling that mimics the dappled light through the trees,”
explains Wilkinson. To elevate that sense of history, artifacts that were unearthed at the site of
Berkeley House are preserved in jewel box niches in the main lobby, a public arcade that connects King and Front
streets, creating an accessible 24-hour pedestrian connection with retailers, coffee bars and restaurants. 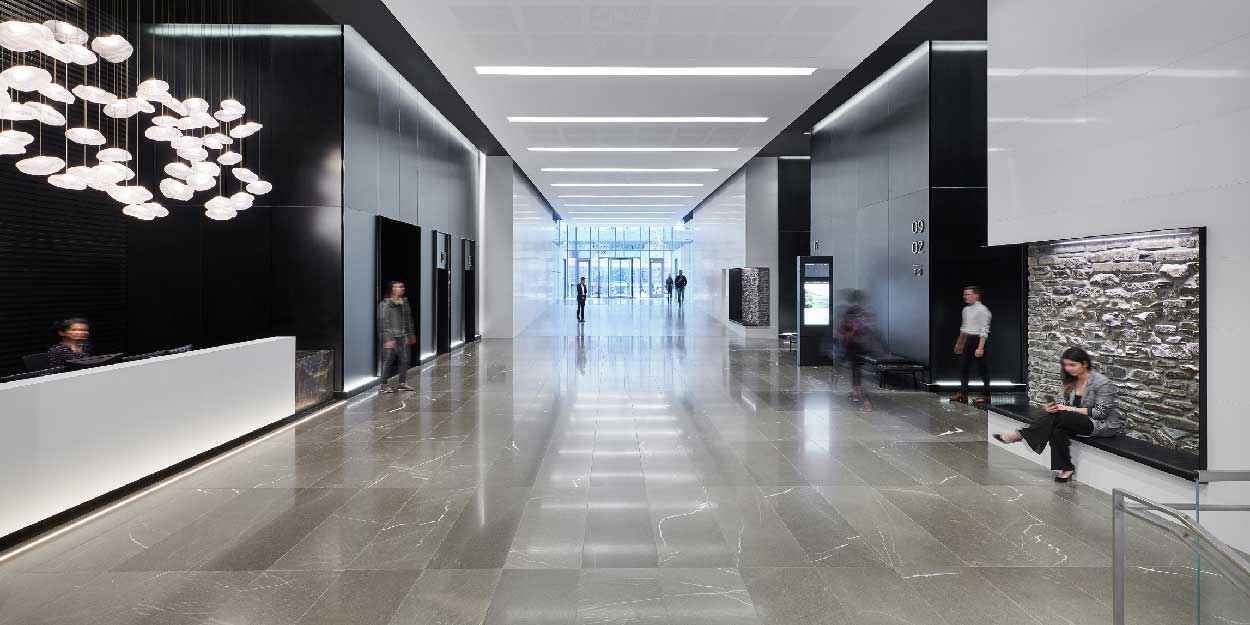 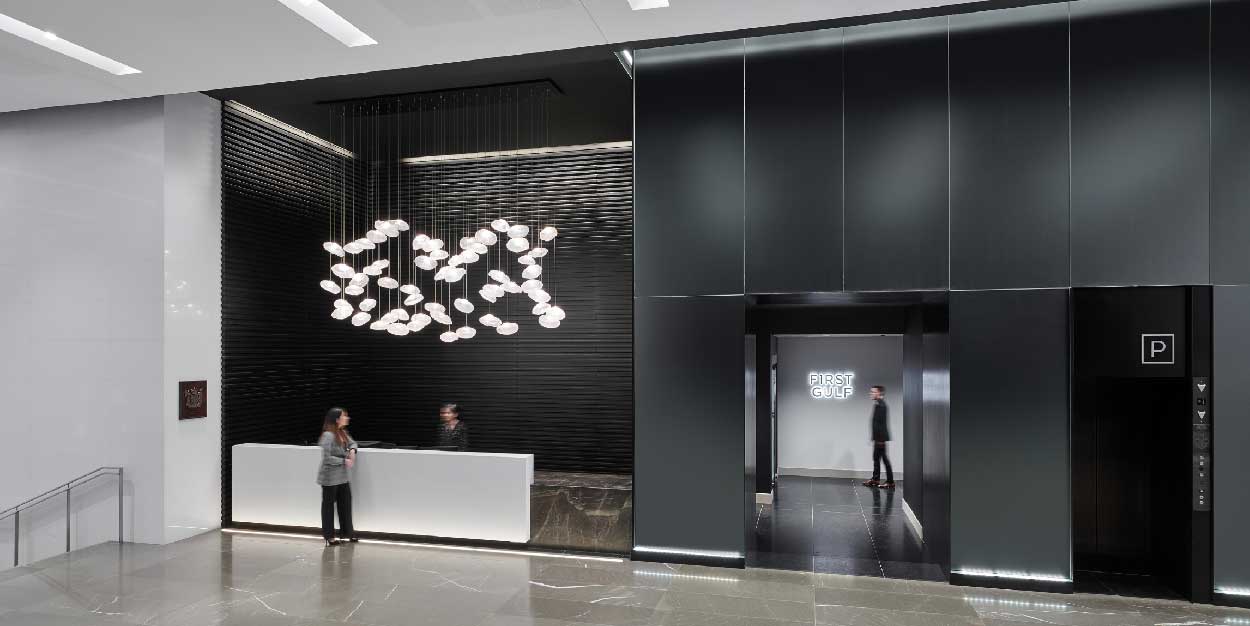 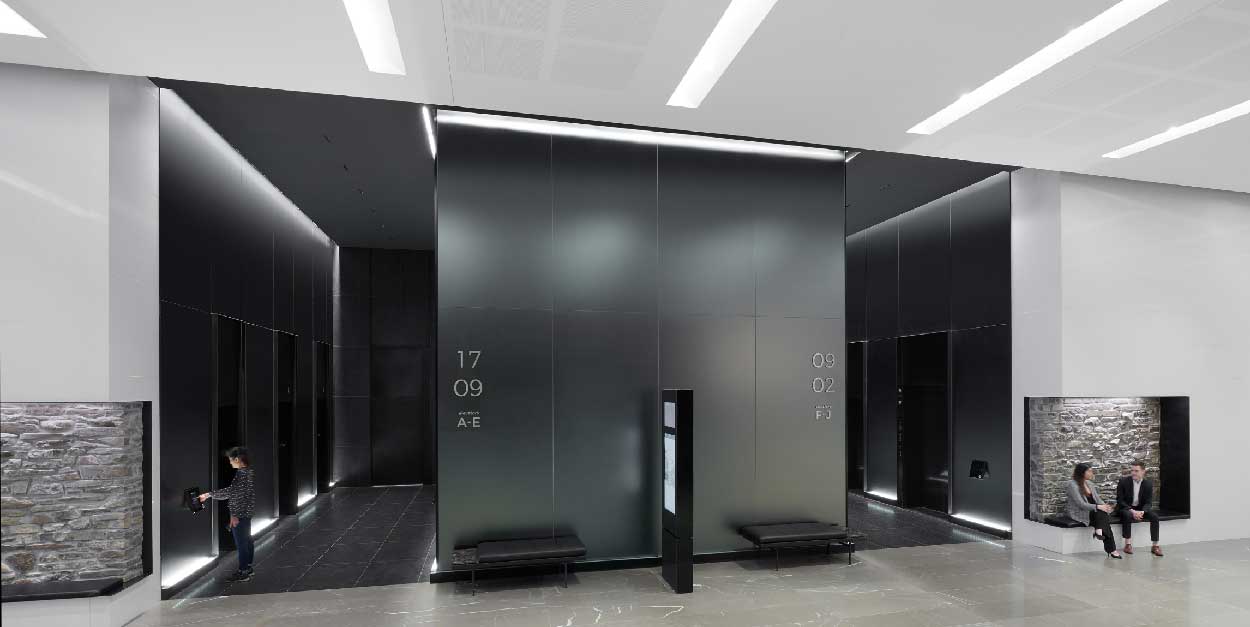 To celebrate the history of the site, the original foundation walls of the historical Berkeley House are integrated in a seating area near the elevator lobby. The humble stone creates a striking contrast with the
smoothness of the white quartz wall and is lit from above to highlight the rugged texture. “It’s subtle but we’re
peeling back something modern and integrating the history within and displaying the old within the space,”
says Wilkinson.

To bring in softness and reflectivity, a handblown glass light fixture by Bocci, Omer Arbel’s West Coast design
firm, hovers over the reception desk. The glass orbs float like jellyfish in front of a slatted wall backdrop in dark
stained wood, another Canadian nod.

But Wilkinson is quick to point out that Figure3 just didn’t shape the design of the lobby. “Our role in advising
First Gulf began before there was a hole in the ground. We consulted on the efficiency and planning of the
building, encouraging outdoor spaces by having patios and places to go.” It’s important to look forward, to
shape the office of the future that now stands on the grounds of a historic Canadian home. “What are tenants
going to be looking for in the future? Because we’re always considering what tenants, staff and employees
want, in this case: beautiful views, open ceilings, flexibility with raised floor systems and making sure
there are outdoor spaces,” Wilkinson explains.

Made up of 10 vertically stacked blocks of varying heights, the exterior of the Globe and Mail Centre offers
expansive landscaped terraces with unobstructed views of the waterfront and city skyline. “By having this
layered building where the floor plates shift means there are a number of floors that have outdoor spaces like
little balconies.” The Globe and Mail has a space on the top floor with a patio which can be rented for a variety
of special occasions, landmark celebrations and corporate events. Now the building is quite another kind of
gathering point for Toronto’s social fabric.