TRAVELLING
THE WORLD THROUGH
THE ABSTRACT

Occupying almost five floors of a 7-storey brick-and-beam heritage building, Flight Centre’s Toronto head office
is anything but boring. Complete with an open-concept floor plan featuring an array of private meeting rooms
and innovative custom graphics, the space fully embodies the brand’s desire for creating a space that connects
the team together and tells a story of world travel.

As you enter the office on the seventh floor, you’re welcomed by Flight Centre’s green-canopied pub cafe
known as the Flight Deck and park-like lounge and lunch area that forms the Central Hub. A bold industrial-style
interconnecting staircase is situated at the heart, connecting each of the floors and team members together.
The overall layout is designed with colour-coordinated neighbourhoods that blend and complement each other
through the office journey. The showstopper in the space is undoubtedly the innovative graphics created by the
Figure3 team. To flawlessly realize Flight Centre’s philosophy, “To open up the world for those who want to see”,
murals of street-view photography, world maps, and experiential graphics are on display throughout.

“We wanted the experience of walking through the office akin to a journey around the globe; an alluring
interpretation of the exotic colours, textures, cultures, adventure, wonders and mysteries we all share through
world travel,” says Steve Tsai of Figure3. 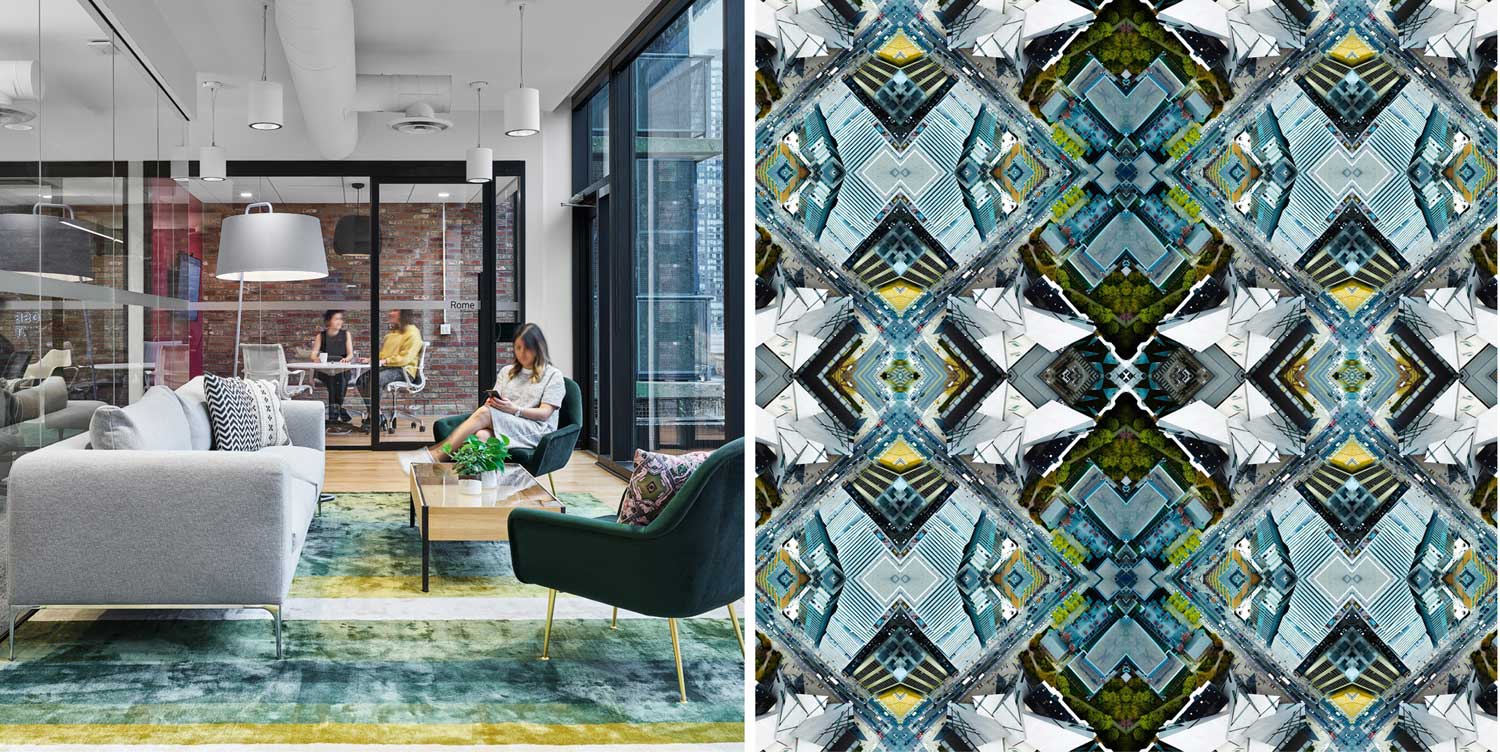 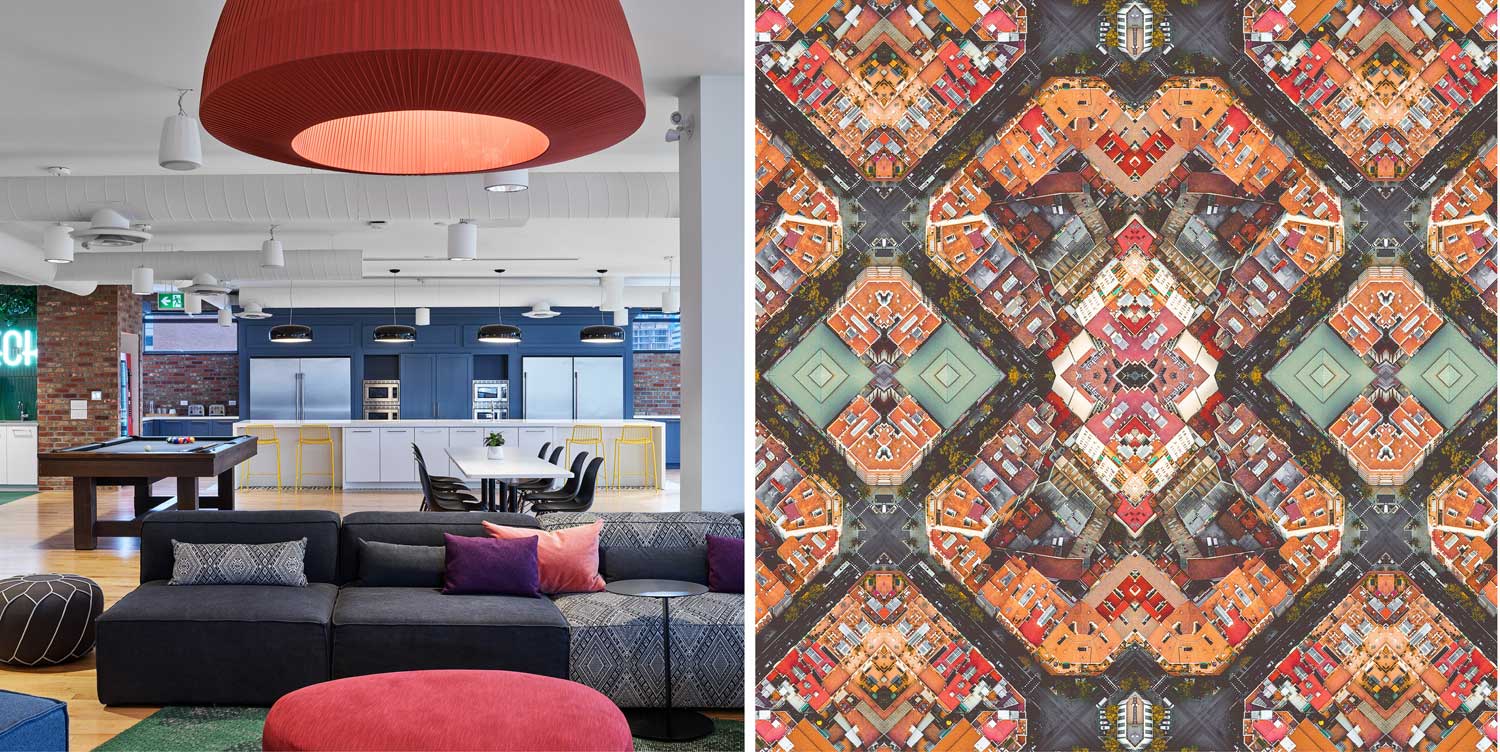 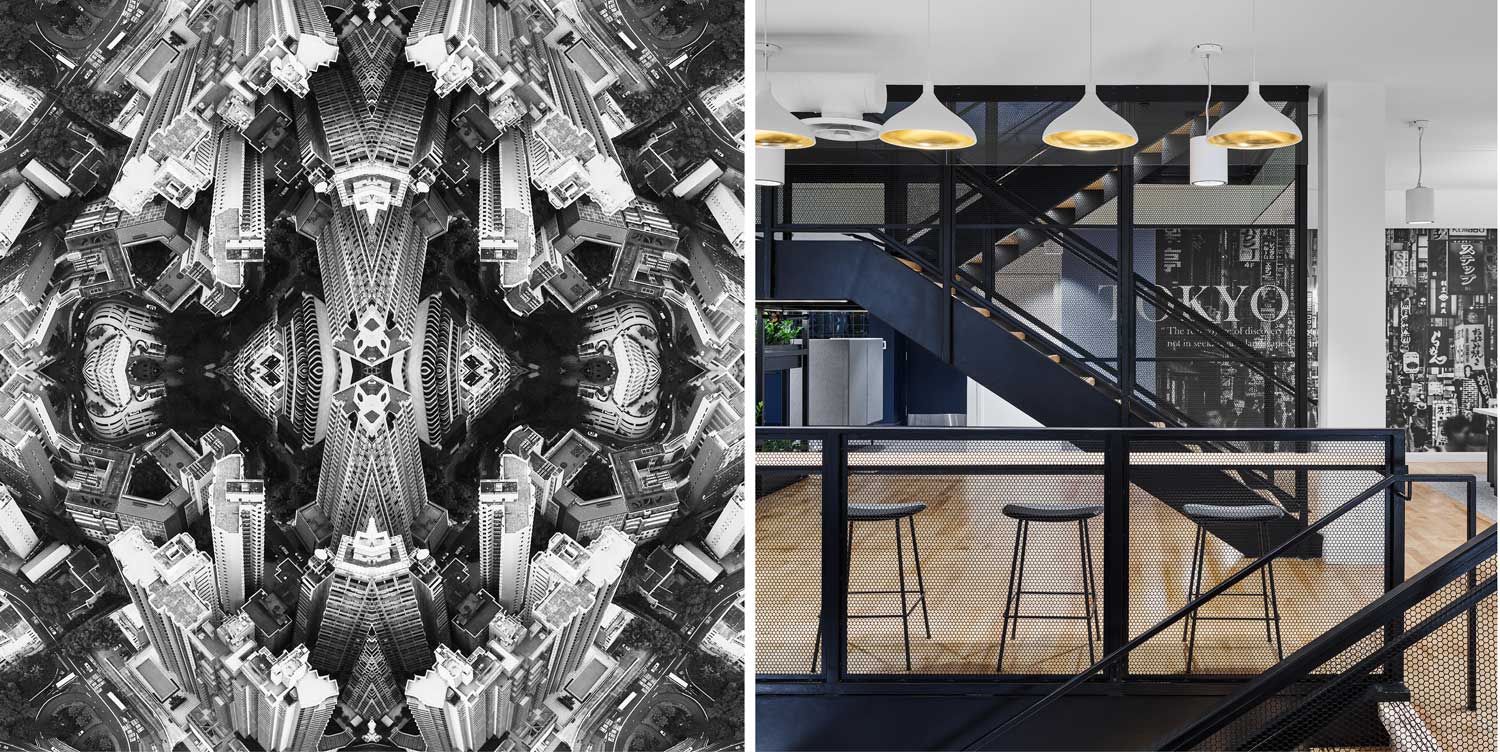 “Seeing the world from above is
fascinating, The striking aerial imagery
provides a unique way to experience
the places we travel to.”
/ says Suzanne Wilkinson

“Seeing the world from above is fascinating,” says Suzanne Wilkinson, Principal at Figure3. “The striking aerial
imagery provides a unique way to experience the places we travel to.”

When it came down to realizing the concept, photos from selected landmarks first had to match the various
colour zones throughout the office, and were tested over the course of several months. Various photographers
were sought out during the process for globe-spanning coverage. After the initial selection, a patterning test
assessed whether each photograph chosen had the potential to make an impactful and artful graphic prior
to final art creation.

While each of the aerial images are manipulated and patternized in a similar way, they all exude a different look
and feel. The Chrysler Building in New York City yields an Art Deco feel while the Pudong District in Shanghai
embodies a kaleidoscopic allure. The appearance of graphics from a macro level seem abstract. However, when
the viewer stops to digest the art, the experience is completely different.

“Once viewers are drawn in to each colourful and curiosity-provoking piece, they soon discover that the
intricate patterns are in fact made up of aerial views of landmark destinations,” says Tsai.

Other landmarks chosen for this project included the Eiffel Tower in Paris, Trafalgar Square in London, the CN
Tower and Royal Ontario Museum in Toronto, Sydney Opera House in Sydney, Garden of Stones in Hong Kong,
Hotel Kia Ora in Rangiro, Canada Place in Vancouver, Eixample District in Barcelona and Singapore Opera
House in Singapore.

Storytelling and travel go hand-in-hand, which is why the graphic concept works perfectly in this office. To the
viewer, be it the employee or a visitor to the space, the different graphics can evoke memories of travel or
inspire the person in the work they’re doing. It was all about creating an emotional experience for Flight Centre. 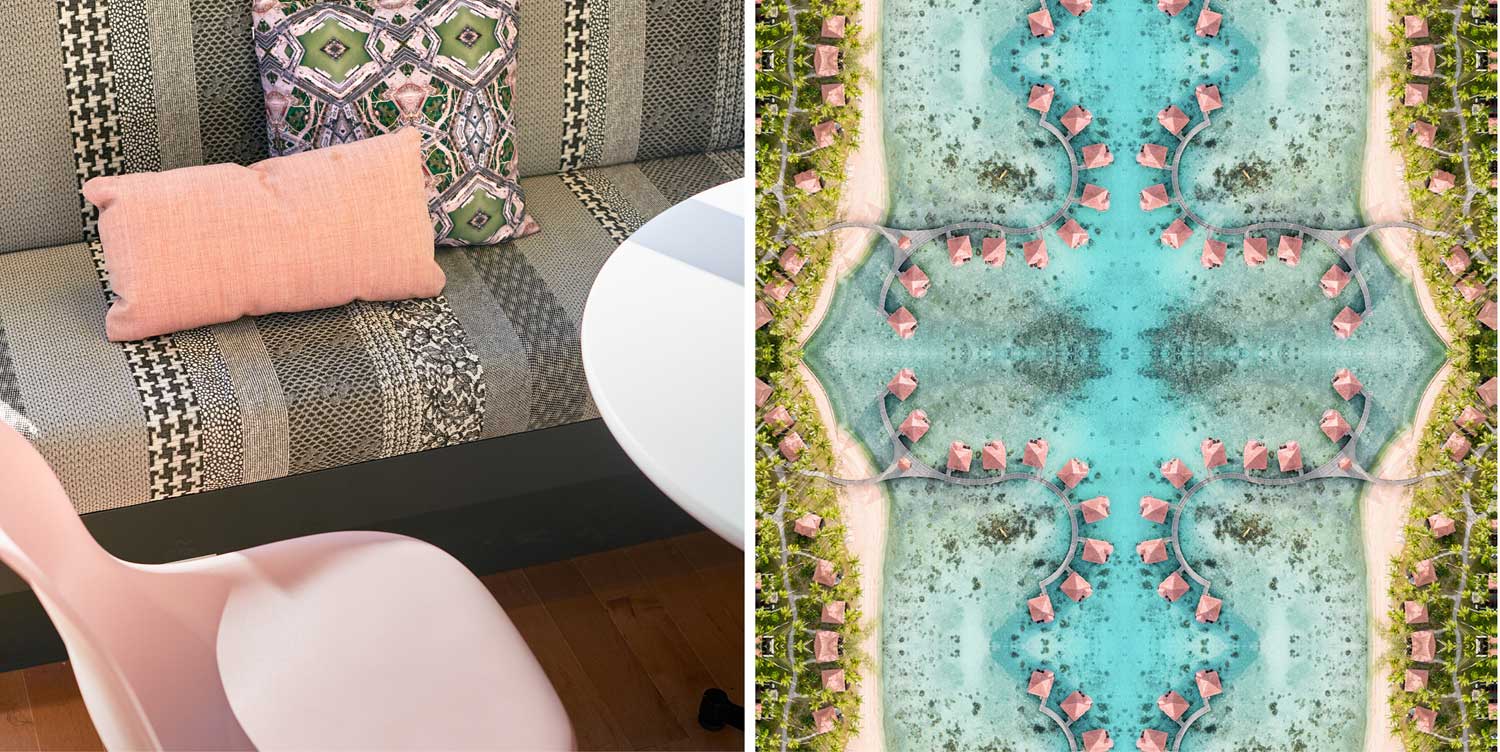 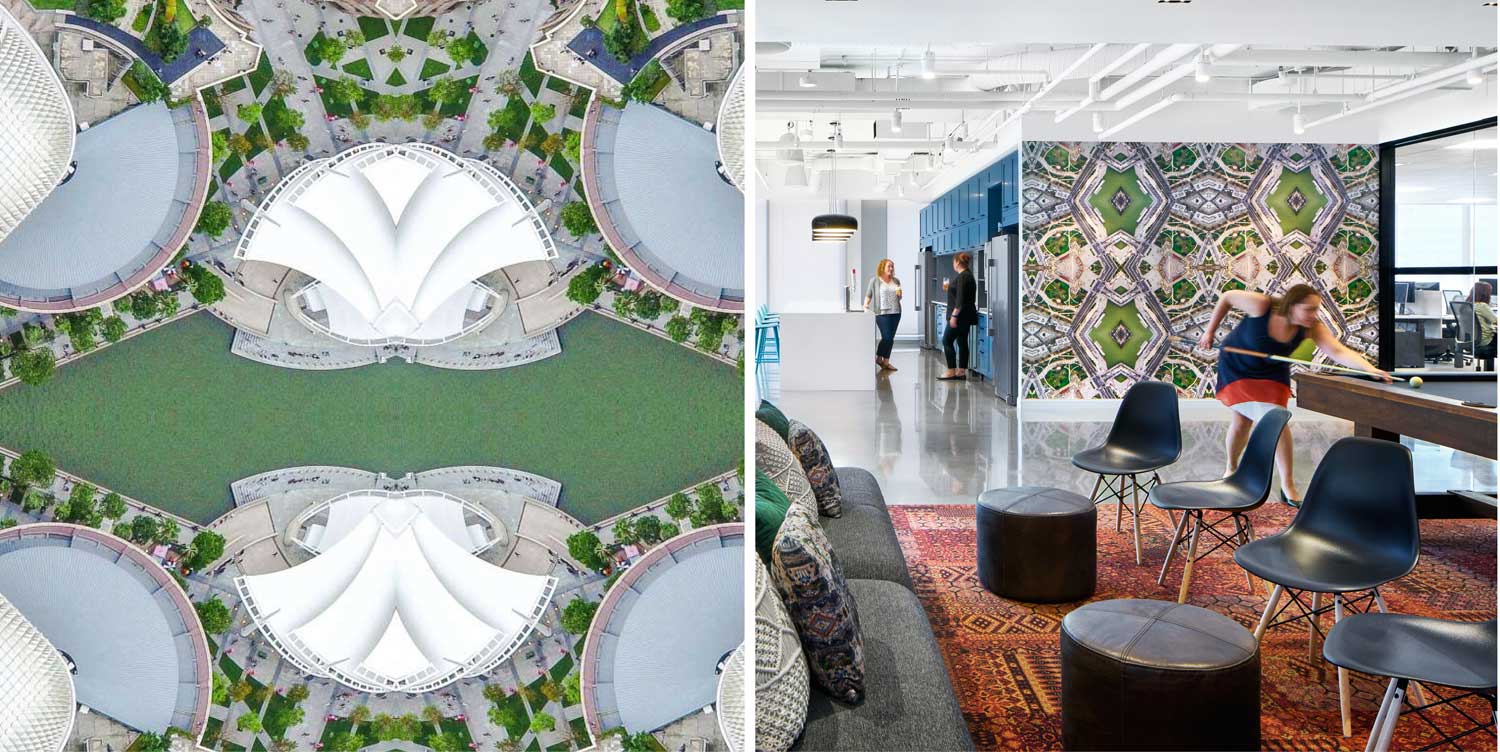 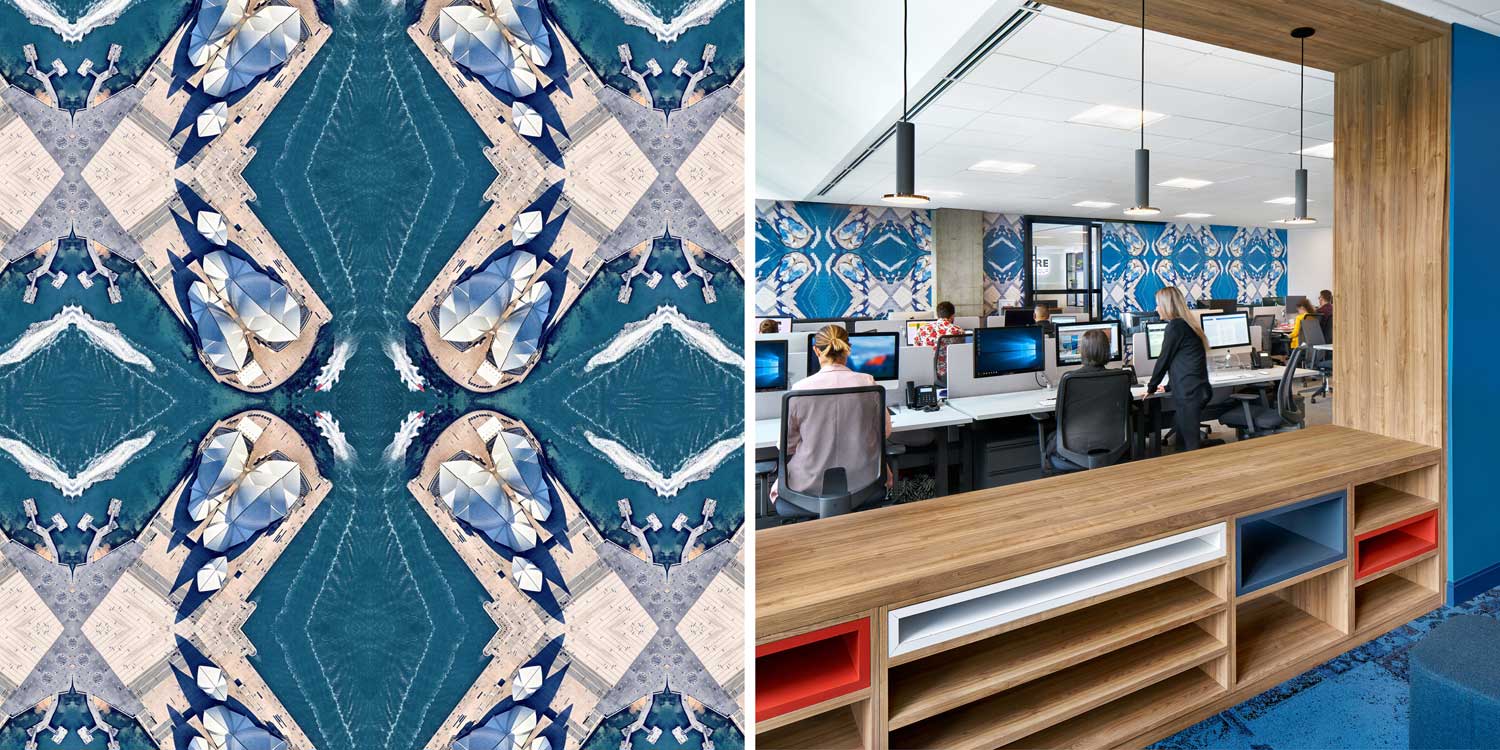