When you first step into the First Gulf office, you’re immediately immersed into an alluring work
space. On one side, you have the private offices neatly tucked away while on the other, a reception
area backed by expansive, panoramic views of Toronto awaits. Located in the Globe & Mail Centre on
King Street East, Suzanne Wilkinson, principal at Figure3, turned to the presidents of First Gulf and
Great Gulf to ensure the core values of both brands were present within the design of the 25,000
square-foot space.

“They were both very polarizing people with very different styles of ownership and management,” says
Wilkinson, who has had a working relationship with the client for 14 years. “We facilitated a visioning
session with both leaders where each had to describe the unique characteristic of their part of the
organization.” The space also had to convey urbanity, creativity, sustainability, and community.
Modern lines mixed with traditional queues was the vision that best represented both the commercial
and the residential side of the client’s business.

Inspiration was also drawn from architecture and its use of raw materials like concrete and natural wood,
which speaks to the philosophy of human intervention with nature and being harmonious of that.

“In order to capture the flow of this very rectilinear building, we softened it by curving
the corners so it would flow better and draw you into the space” explains Wilkinson.

In the private staff area of the office, the atmosphere is kept minimal, bright and clean. Since the space
is designed in a semi open-concept format, it was important to include a mix of smaller meeting rooms
and private telephone rooms to ensure people working in this office had options of places to go. With
the vision of exposing the company culture to all who experience First Gulf’s new headquarters, Figure3
proposed to place their community space and lunchroom – which is often hidden behind doors –
at the forefront, adjacent to the reception and boardroom facility. “This disrupted their way of thinking,”
says Wilkinson.

While the client was used to a more traditional layout, the idea here was to connect potential clients
and visitors to the people of First Gulf in a more hospitable environment. Wilkinson believes that when
employees have pride of place, they emit a sense of ownership and commitment to the organization.
It changes how they feel and behave.

A warm neutral palette with a combination of different woods were used to contrast the raw stone textures
and exposed ceilings seamlessly. The look is very much of a hotel lounge by nature, complete with
a double-sided fireplace, a curated collection of eclectic furniture, a vibrant art collection and a show
stopping backdrop of the city that floods in natural light.

The corridor to the coat storage and bathroom is dimly lit and features a mural of a forest by Tom Fabia,
ensuring every pathway is a curated journey. In the boardroom, a custom light fixture sits directly above
a reflective and sleek table that Wilkinson describes to be “not at all expected but simply beautiful.” 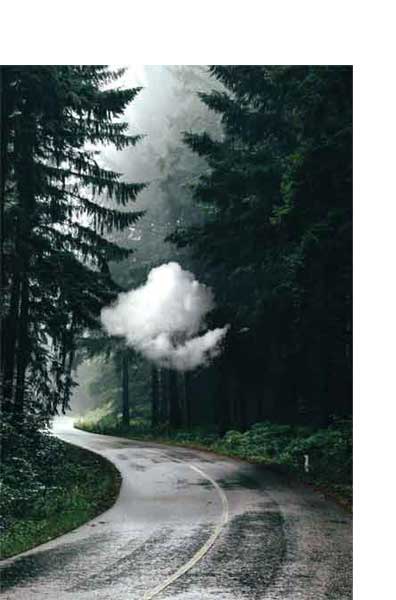 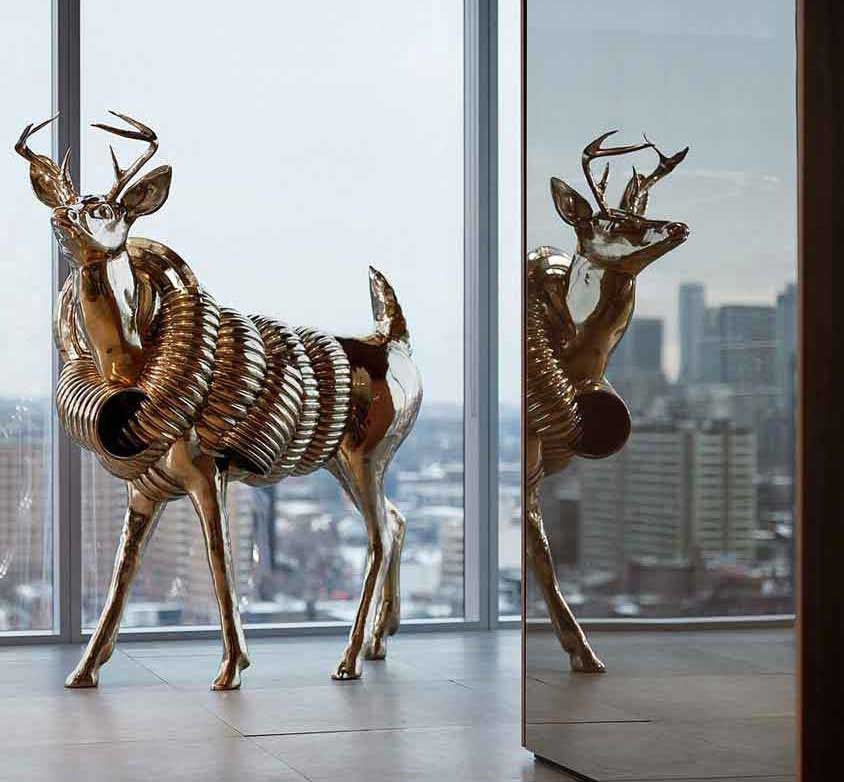 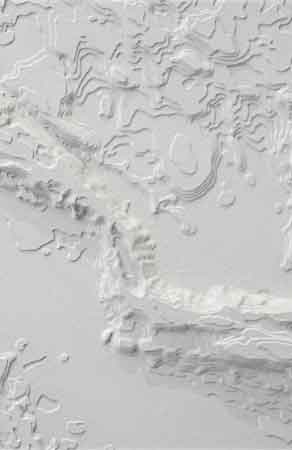 You can see an art piece by Robert Cram of a deer that is cast in brass with mechanical air duct coils
wrapped around its body, which is situated at the end of the boardroom gallery.

“You can either be really upset about it or it can inspire while stirring up emotion,” says Wilkinson.
That’s not the only conversation-starter in First Gulf’s office space. Upon entry, you’re greeted by a
medallion-like piece by artist Joy Charbonneau who specializes in creating artwork of geological data
and bathymetry to highlight features you can’t necessarily appreciate in real life. For First Gulf, the
Toronto Harbour was captured, showcasing what exists below the surface of the water.

“We needed to tell the story of how First Gulf and Great Gulf respect nature through sustainability,
innovation and construction,” explains Wilkinson. The art piece shows how the natural shapes of the
harbour are interrupted by human intervention. “Each aspect of this design is very thoughtful and
deliberate,” says Wilkinson. “Blending the architectural details to represent both sides of the business
of First Gulf and Great Gulf and respectfully seeing them come together where it makes sense… I think
the space represents who they are.”