Modern meets traditional in the design of Trailside – a luxurious apartment building surrounded by natural
landscapes and extensive trails in the city of Oakville. While the architecture of the building started
off as quite modern, it was important to Dominic De Freitas, partner at Figure3, to ensure that the city’s
appreciation of the old world was brought into the look and feel of the entire project.

“Oakville as a city is known to leverage the history of England and the different aspects of what the U.K.
was in Victorian times,” explains De Freitas. “They have really retained that appreciation for the interpretation
of Victorian-English style into the Canadian culture.”

Along with the Victorian Era, De Freitas looked to European boutique hotels and the likes of Ted Baker
who have mastered the art of taking inspiration from the old and modernizing it in a way that results in
a beautiful, timeless piece of work.

Originally, the exterior of the building was all glass with lots of grey resulting in a very cold look. To pay
homage to the Victorian era and to add some warmth, a copper band with lighting within it was added
to the underside of the soffit on the roof, becoming the crown of the building. Vertical wood pieces
were then placed around the facade to tie in the base elements of the roof. To evoke a sense of history,
an iron canopy structure with reeded glass creates a major statement to the main entrance. “Before, you
couldn’t see the front door because it blended in with the full glass facade,” says De Freitas. “And we
know in traditional design, the front door is the showstopper.” 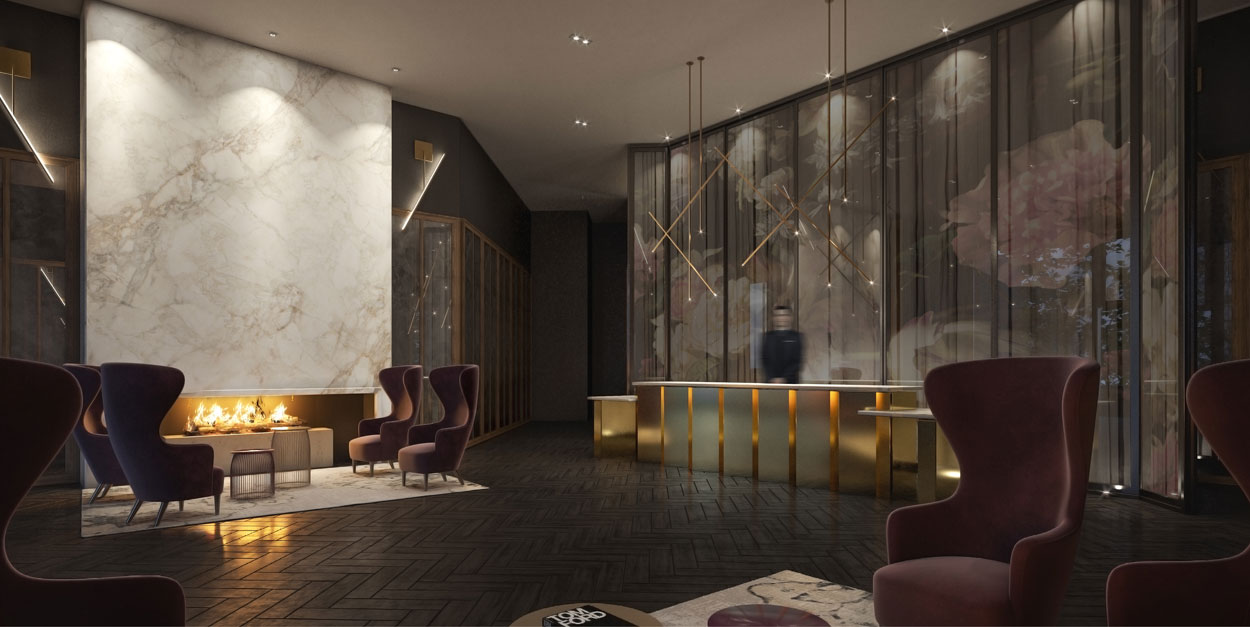 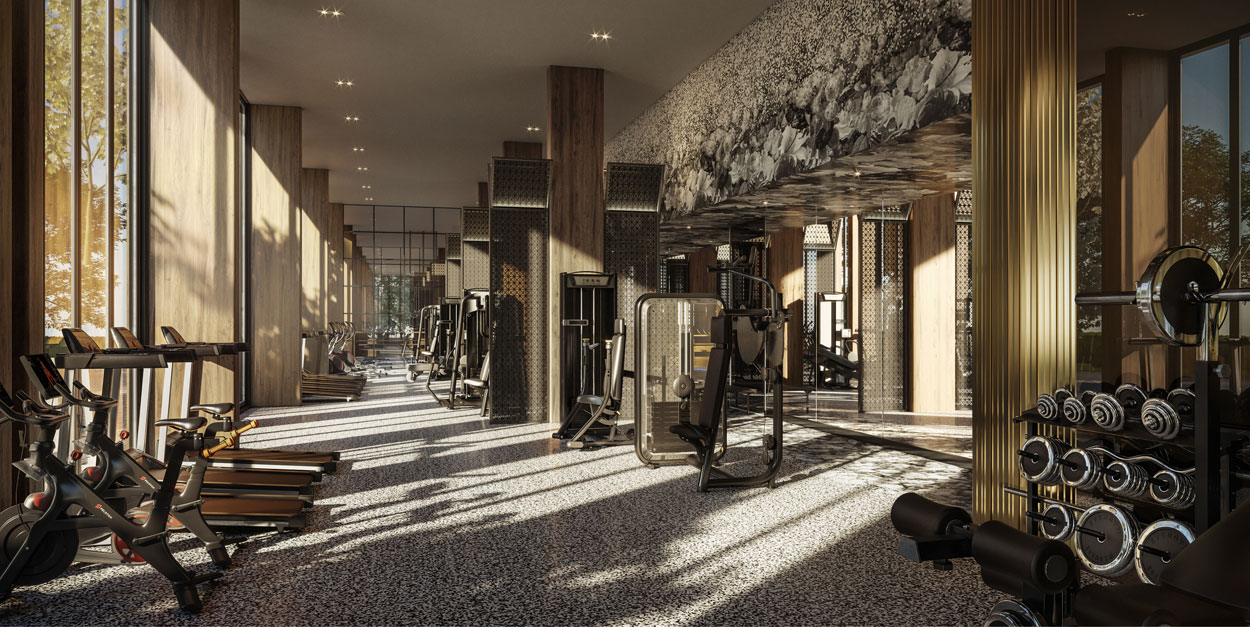 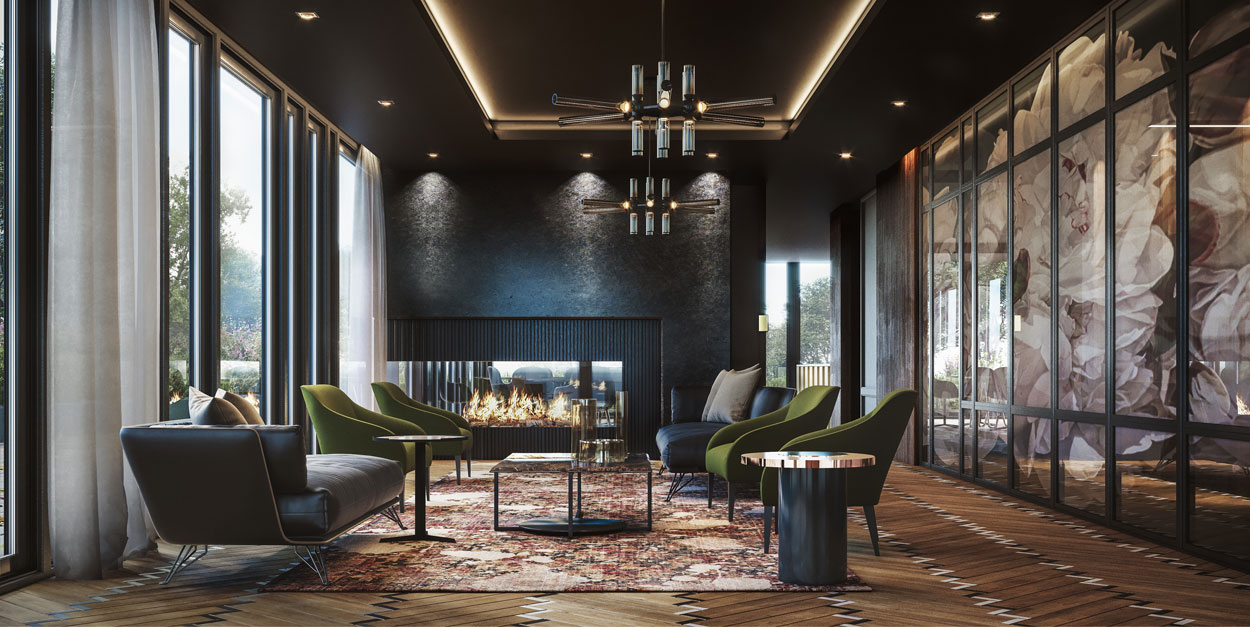 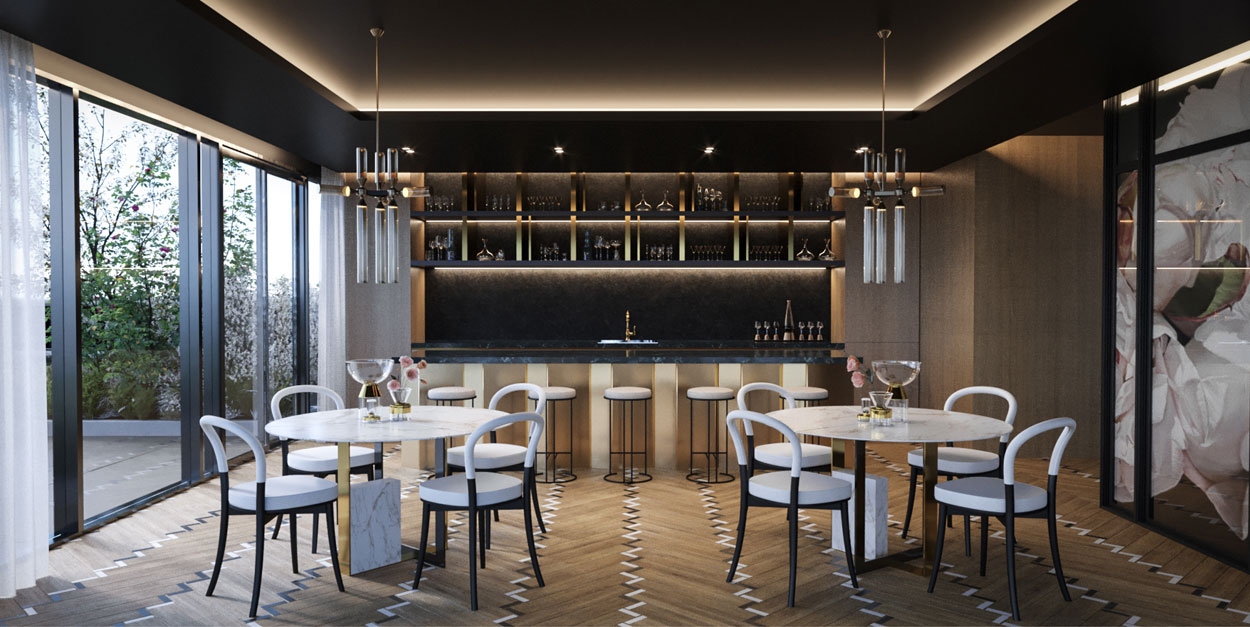 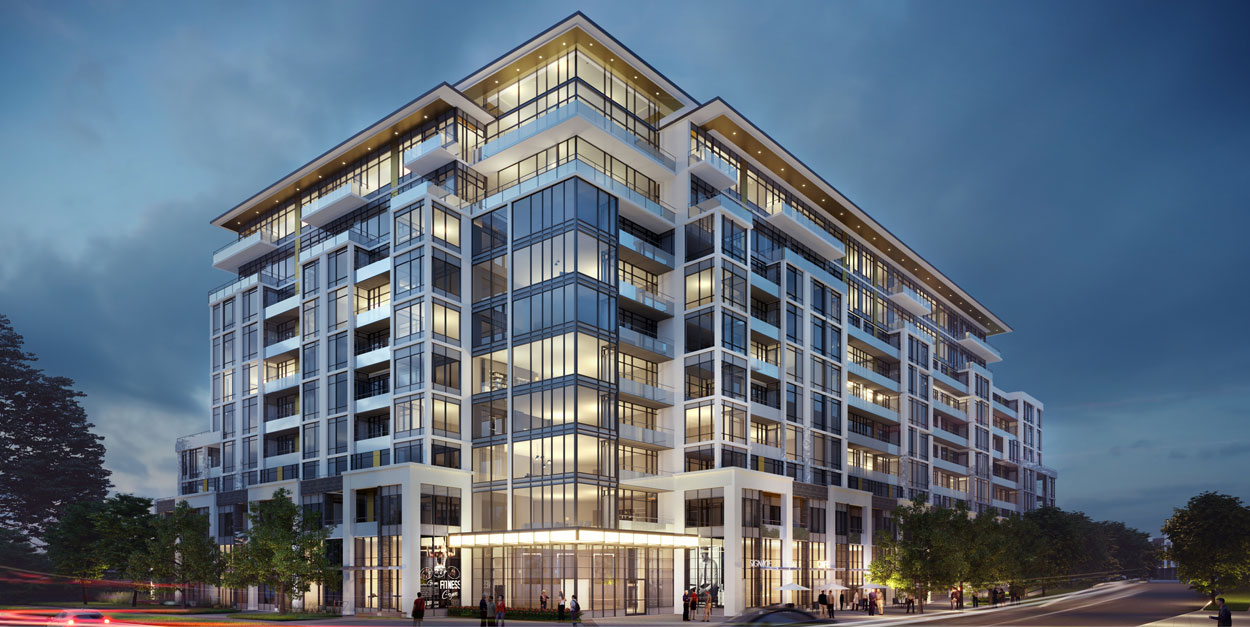 Inside, the lobby is grand with tall ceilings and herringbone floor tiles done in a large scale to mimic an
old English estate. Traditional wainscotting on the walls have been modernized here with antique mirrors
between each panel. The white marble fireplace, a popular feature in the Victorian era, embodies
a natural veigning and sharp framing. It is anchored by Tom Dixon wingback chairs paired with coffee
tables that mimic the design of traditional Victorian bird cages.

One of De Freitas’s go-to’s for inspiration is fashion. For this project, Ted Baker was a major influence.
His ability to blend men’s suiting fabrics along with feminine notions of florals, silks and satins was the
jumping off point.

“He had a strong floral statement in his patterns that he was using in his clothing and juxtaposing
those with houndstooth, herringbone and pinstripes,” explains De Freitas.

In the party room, a traditional herringbone floor has been connected with marble to create a
zig zag effect to resemble the top stitches used in outerwear. “Almost like a baseball stitch, that was
overemphasized,” he says. The jewel toned furniture and fabrics were inspired by the colour pairing
Baker uses in a lot of his collections. 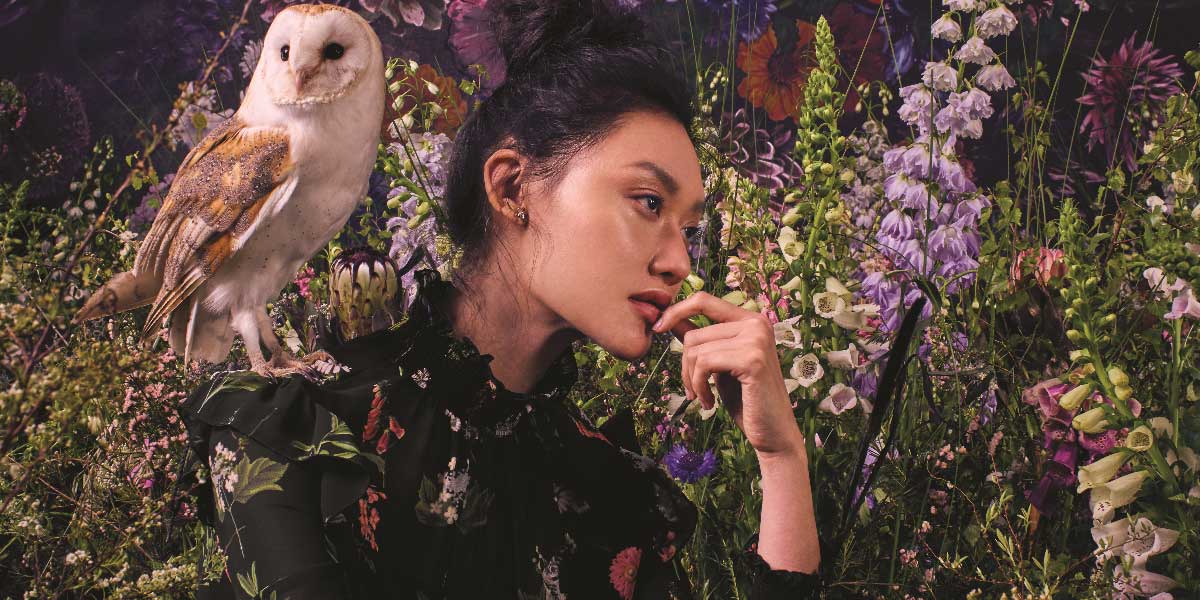 “He had a strong floral statement in his
patterns that he was using in his clothing and
juxtaposing those with houndstooth,
herringbone and pinstripes”

The focal point in the lobby is an oversized floral piece situated behind the reception desk. It’s a
traditional Victorian image of oversized peonies and roses created from an original painting by Belgian
still painter Jan Davidsz. de Heem. The artist is from the 1600s but his work was very popular in the
Victorian era. “His paintings ended up being used as these floral patterns and wall coverings in Victorian
times,” explains De Freitas.

For the Trailside lobby, the image was oversized and printed on silk, then sandwiched between glass
and inserted into panels. Another floral art piece by de Heem was printed on translucent film and applied
to glass, and acts as a separator between the party room and the corridor.
uses in a lot of his collections. 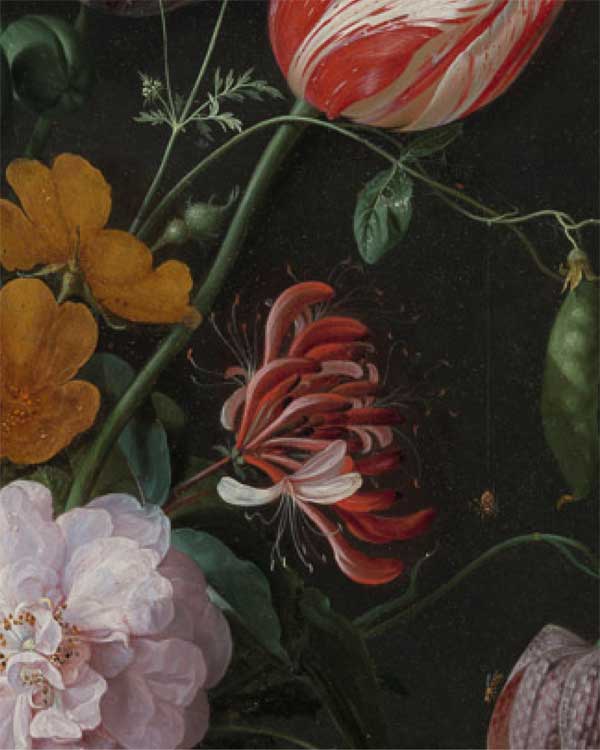 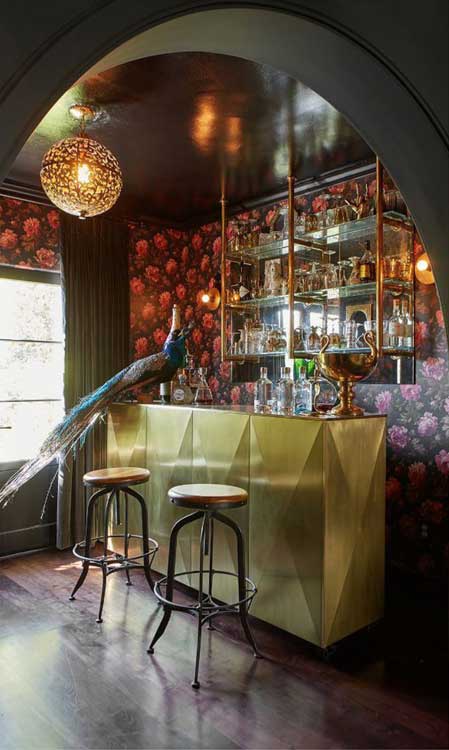 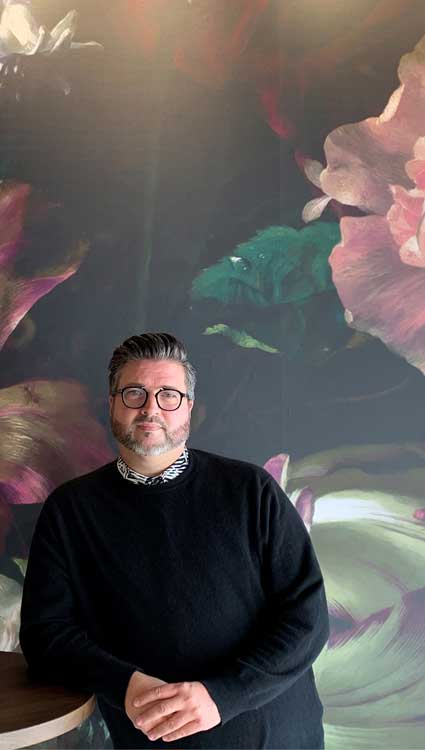 The final look does mimic one of a European boutique hotel, but that wasn’t the goal. It came about organically as the traditional and modern elements were married together.

“The hotels I had been to in London and England, nothing is overly matched,” says De Freitas. “They’re not afraid to mix patterns and colour together. When I look at boutique hotels in Europe, they’re layering different materials together that create the depth in the space.”

Which is a similar result in the Trailside project. Everything is strategic – even the lighting. If you look up, the ceilings have been completed in a dark colour so the light filtered into the room can be controlled to set the mood. “By doing the ceiling dark here, we focused the light to shine exactly where we wanted them and not be reflected off of a white ceiling,” says De Freitas.