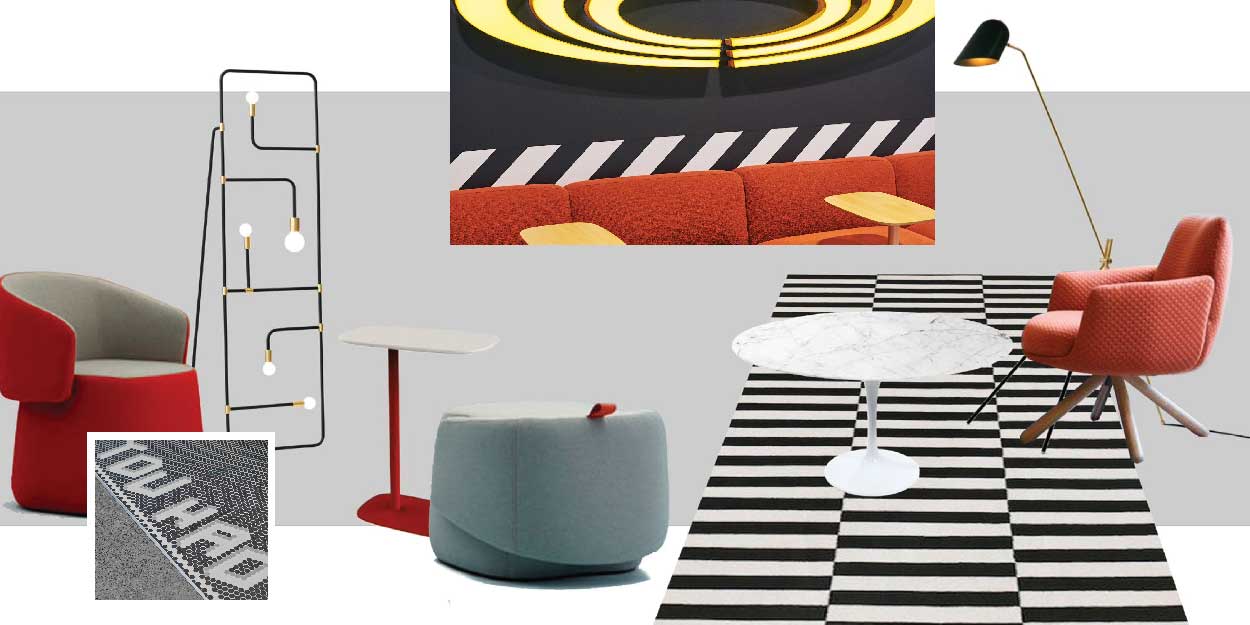 Everything in the movies is larger than life: big, bold and eye-catching. Since the dawn of Technicolour
in 1917, this medium is about an immersive experience that takes the senses on a journey. So when
Cineplex approached Figure3 about updating their long standing mid-town Toronto headquarters,
it was time to pull out all the stops.

This update wasn’t just about a few special effects: there were functional needs that had to be
addressed. The staff and teams were situated in various parts of the two four-floor buildings, connected
by an atrium. Physical barriers limited access to natural light, impeded intuitive navigation, and left the
staff feeling isolated which limited their interaction. The 8,500-square-foot office simply wasn’t
supporting the employee’s preferred way to work.

CBRE was hired to manage the project and create a workplace strategy, with the goal of rolling the plans
out to the rest of the facility. They conducted an employee survey to determine what was most wanted
in a new workplace. The staff’s wish list for a choice of tools and settings, enhanced informal
collaboration, brand alignment, health and well-being and a sense of community culture.

Using a portion of the space on the ground floor, Figure3 envisioned a pilot project to bring together
2 of their teams, World Gaming and Design & Construction. It allowed the client to test new styles of
work with the intent of applying learnings to future renovation projects. Now with only four private
offices, the space is open, with flexible work stations that encourage employee connection. Flanked at
the ends of some of the workstation rows we wanted to introduce memorabilia shelves where staff
could display artifacts from movies and games the teams were working on,” says Tamara Rooks,
Creative Lead at Figure3.

“The space is meant to reflect the high energy atmosphere that comes with the Cineplex brand. In
their movie theaters and Rec Room facilities the experience is all about providing entertainment. We
wanted to bring that into their office environment in a way that felt appropriate but also provided
that visual stimulation that one experiences at their locations.” 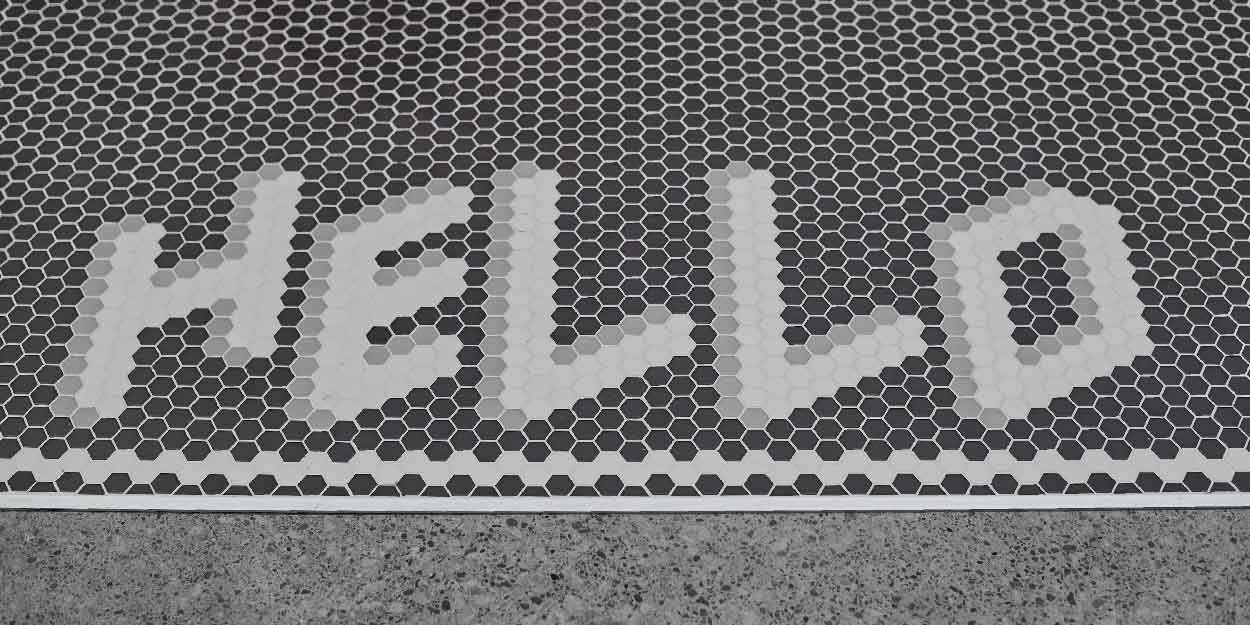 Privacy pods are located throughout allowing for focused heads-down work. Large red tables are
used by construction teams to review architectural drawings and separate the offices and workstations.
A feature a canopy of bulbs overhead is reminiscent of an old-school movie theatre marquee. Large
yellow tables are placed on the perimeter of the workspace for ad hoc meetings, with lights retrofitted
into cages overhead to resemble stage lights on movie sets. Siting the workstations along the exterior
perimeter allows natural light to flow throughout the space.

The meeting rooms appear like a gallery corridor, each resembling lightboxes with graphic imagery
and multi-coloured privacy glazing to ease navigation. The white diagonal lines of the clapperboard
(that iconic Hollywood staple that signals the start of shooting a scene) is applied to the glass panels
separating the offices, which don’t obscure the transparency so light can still filter through.

The theme of theatre and spectacle makes several recurring star appearances throughout the space,
acting as a design version of “Easter eggs” for eagle-eyed film buffs. “The famous line by Renée
Zellweger in Jerry Maguire is immortalized in penny tiles across the office entrance floor to greet
visitors, a playful nod to a great script” says Rooks. In the cafe, a plush red banquette recalls classic
theatre-style seating, while a black and white motif that mimics a clapperboard sandwiches the
Cineplex logo. Hovering above the cafe, a lightbox spells out “Showtime” like a movie marquee.

To separate the entrance, wide ropes are strung as a divider, which serve as a nod to theatre rigging.
Thick ropes are typically used to operate the fly system that lets the stage crew shift curtains, scenery
and other stage effects.

Cineplex’s new agile office encourages innovation and collaboration within their cross functional teams,
enabling the company and their staff to do their best work. The new space is an inspiring environment
creating a strong connection between staff and the consumer by immersing them into the Cineplex
brand and culture. And that’s a wrap. 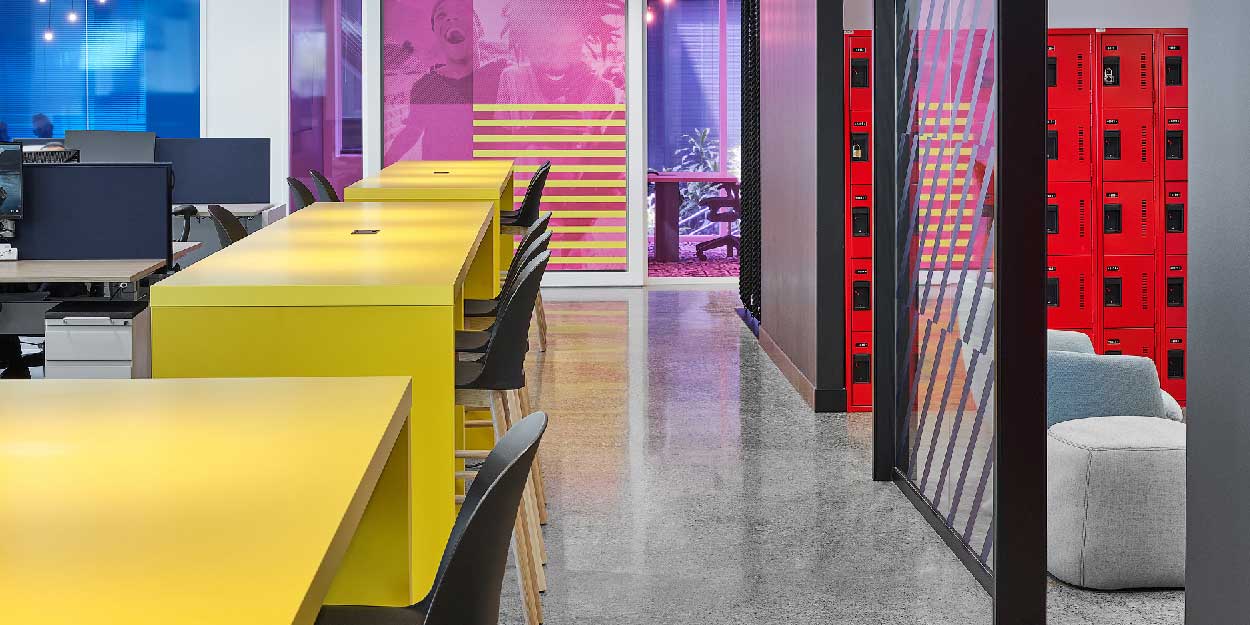 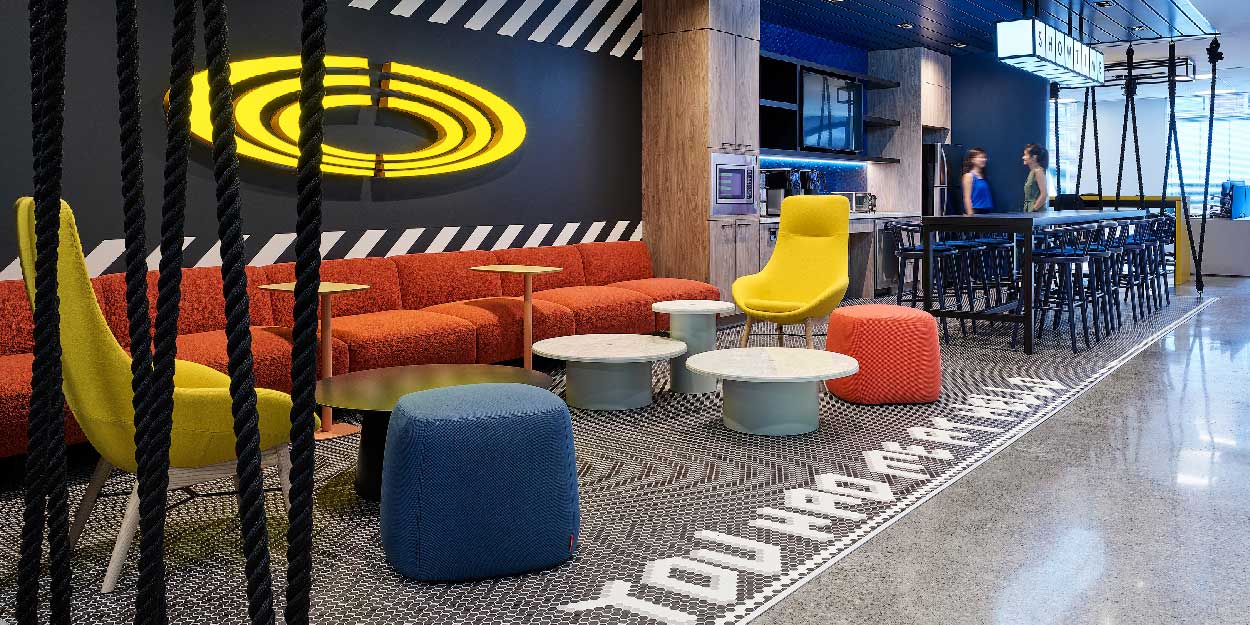 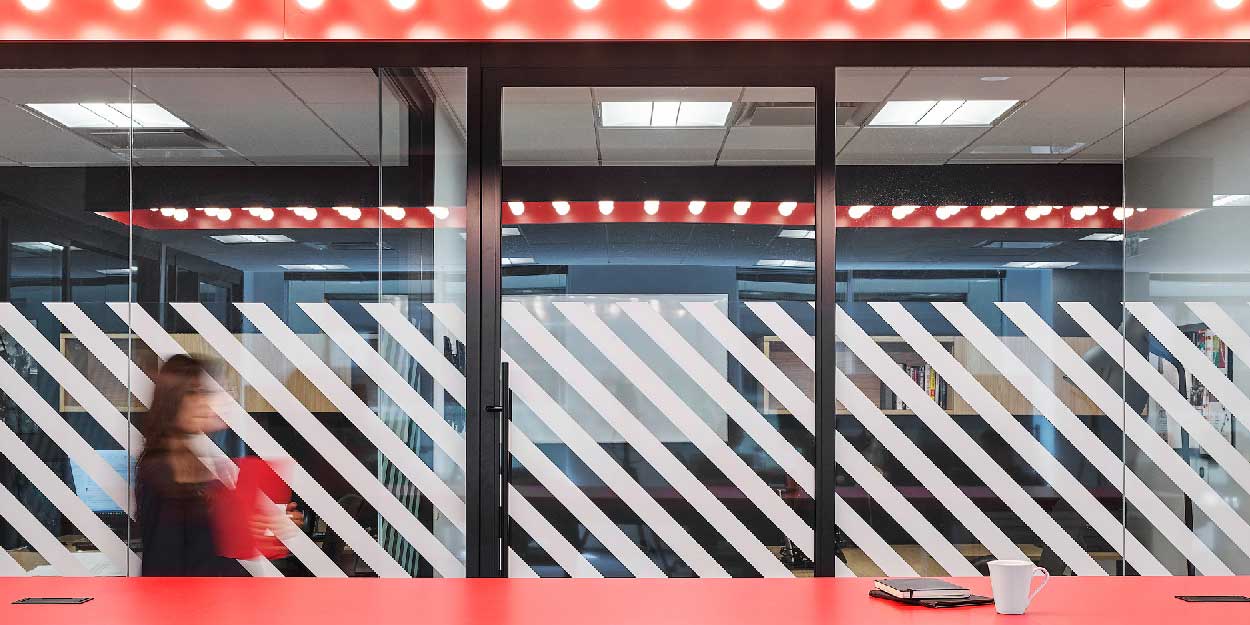 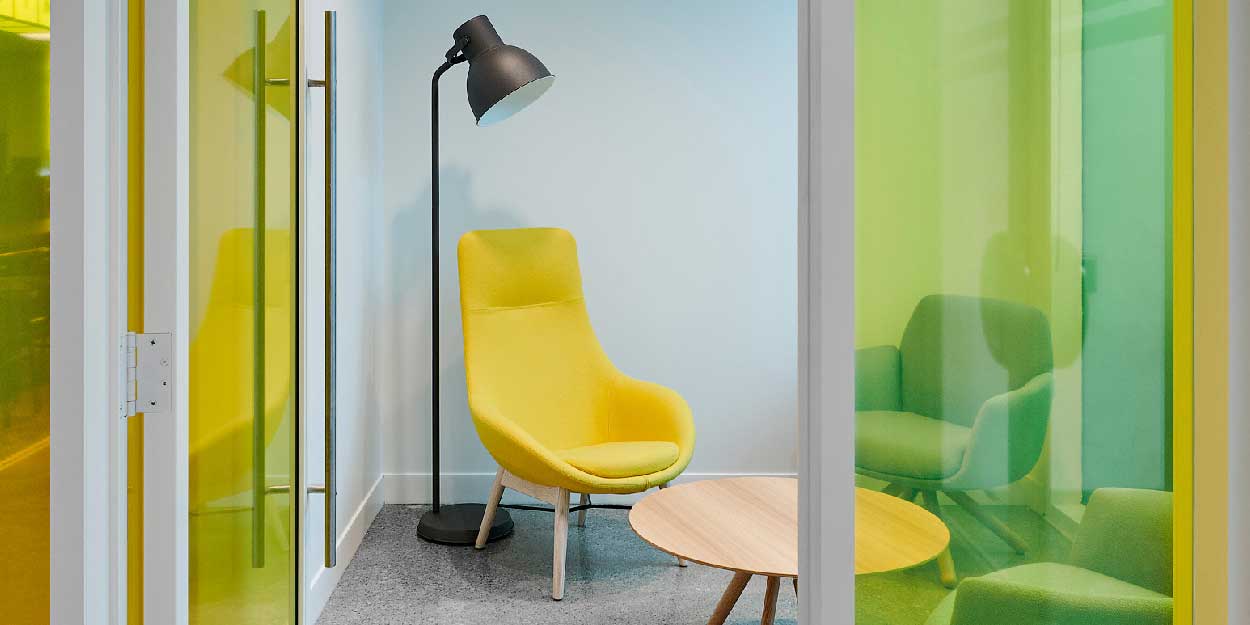 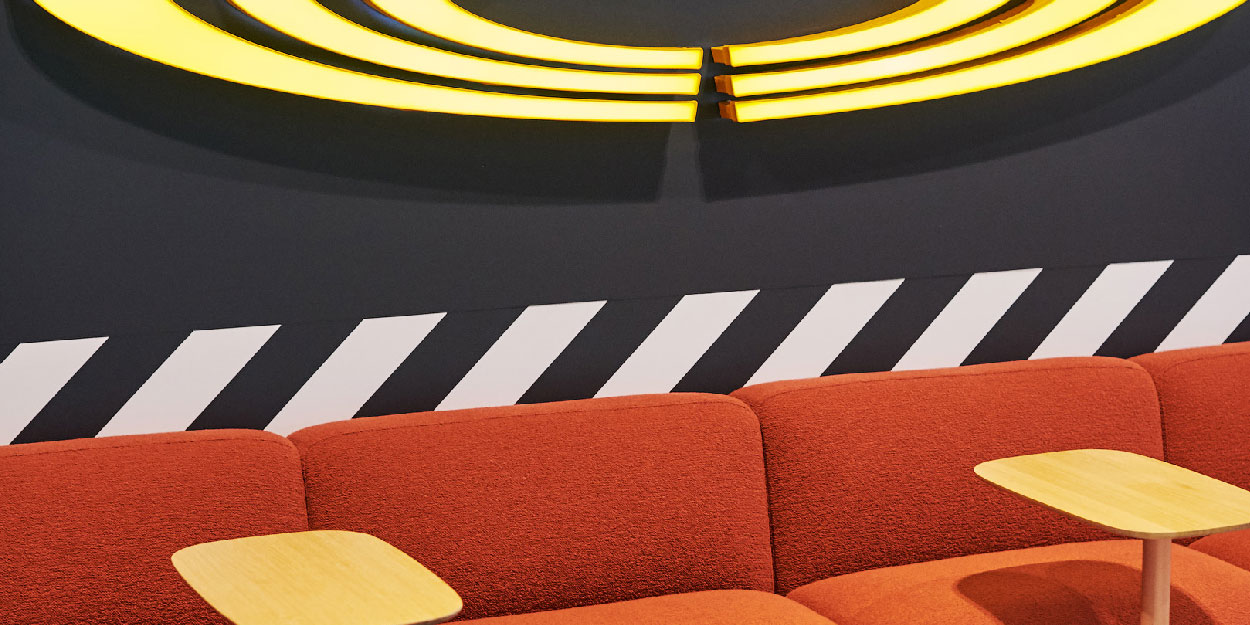 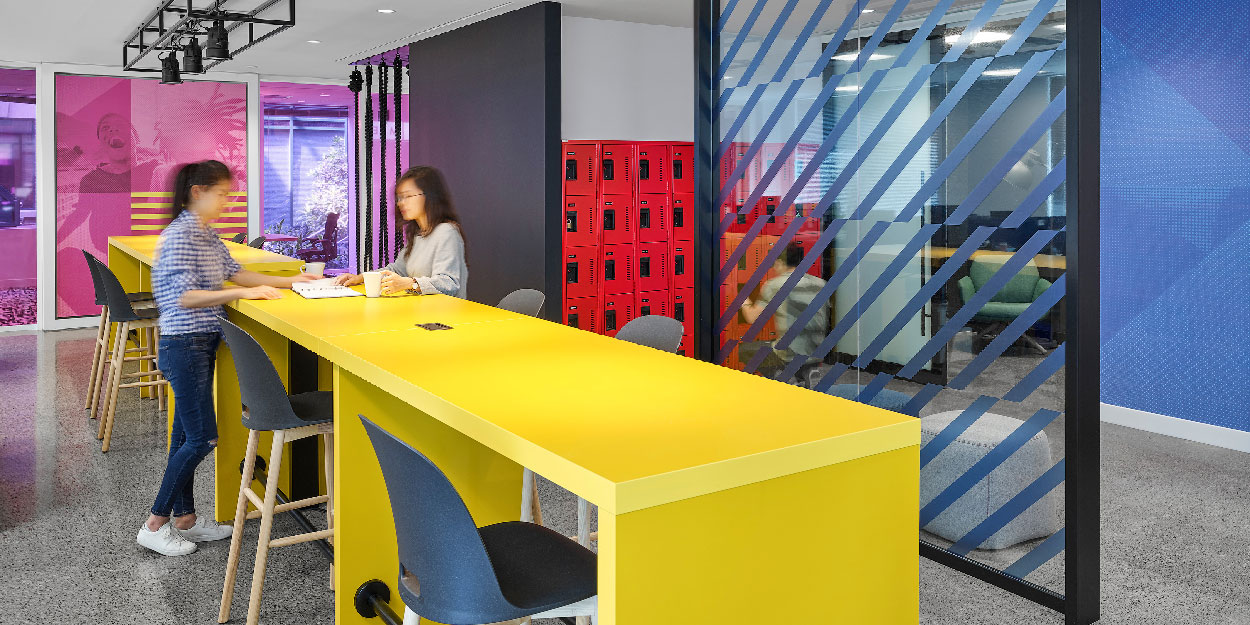